Perspectives have changed and gin is in!  The drink that was once associated with grandparents has transformed itself, especially when it comes to luxury end of the gin spectrum.

In the UK over the last five years the number of distilleries has doubled and there are now over 300 across the country!

I am lucky enough that one of my favourite gins have their distillery a short drive away, it would have been rude therefore not to pay them a visit with my gin loving friend Lili.

Silent Pool gin is produced at their distillery located in the beautiful Surrey hills at a farm just outside of Guildford. As part of the contract for the distillery to be based on the farm apparently the agreement is that half of the rent each year is to be paid in gin!  In addition to the already stunning location for the distillery it sits on the banks of the historic waters of Silent Pool.

The company was founded back in 2013 by three friends James Shelbourne, Ian McCulloch and Steven Kavanagh, who decided to create a new kind of gin distillery where they would produce handcrafted, artisan spirits with uncompromising quality.

As part of the distillery’s efforts towards sustainability, the still is powered by ‘the Major’ who is a vintage steam boiler purchased from a collector who has an enthusiasm for all things steam!  The Major is fired by locally sourced sustainable wood. In his previous life the Major powered cranes on the Liverpool docks, the Majors job these days is quite different as he powers the hand-built copper still called Juliet, (set to retire after the investment in a newer version of Juliet). 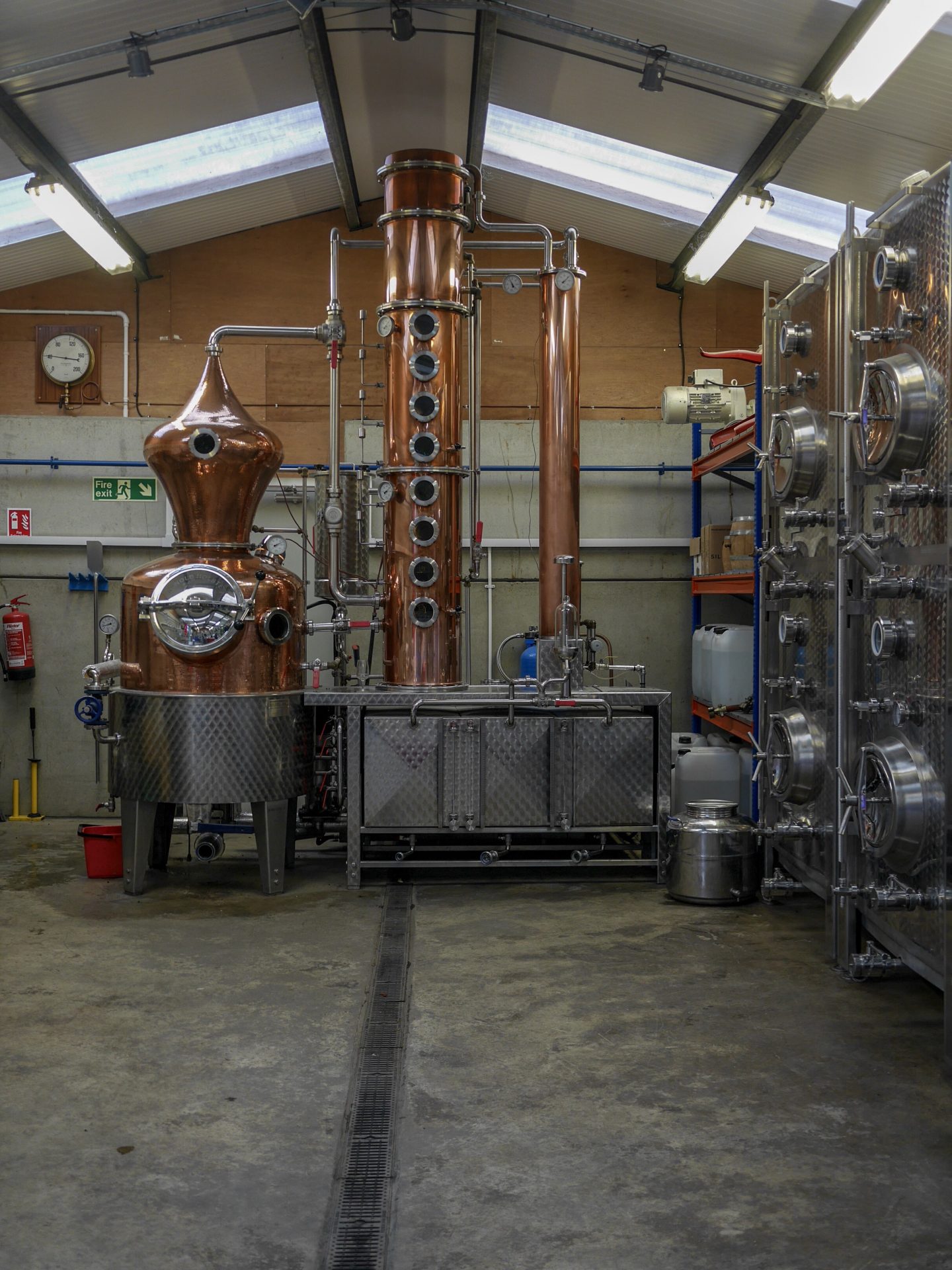 The sustainability effort also compromises of using filtered spring water by passing a hose through the distillery doors and drawing water directly from the Silent Pool itself.  Completing the distillery is the bespoke stainless steel tanking which is designed to hold both the spirit and the crystal clear water used to make the delicious gin which has a bottling strength of 43%.  No part of the production is taken off-site, even the bottling and labelling process, which up until two weeks ago was still done by hand.  Further products are locally sourced where they can be.

Prior to our tour I had not realised just how much goes in to a bottle of gin.  The evening was most ginteresting to say the least.

Over the course of an hour and a half we learnt about the foundations which build the brand, the legend of Silent Pool, all the 24 botanicals that go in to a bottle of Silent Pool gin to give it is delightful flavor. We even got to try some of them, (Juniper berries and licorice were my favourite).  We also went on a journey of the four-stage process Silent Pool gin goes through over the course of the three hours it takes to make before it is left to stand for ten days. 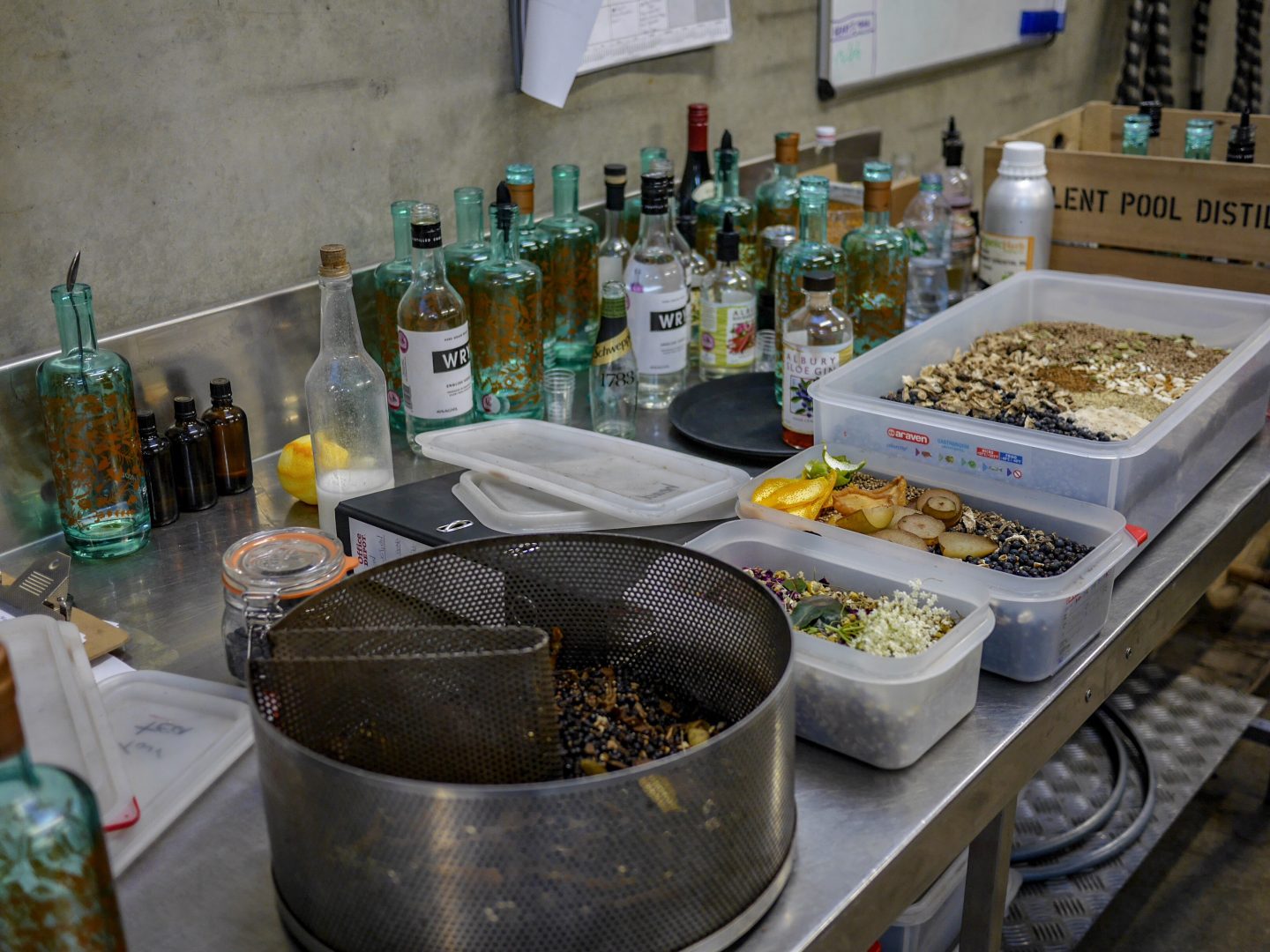 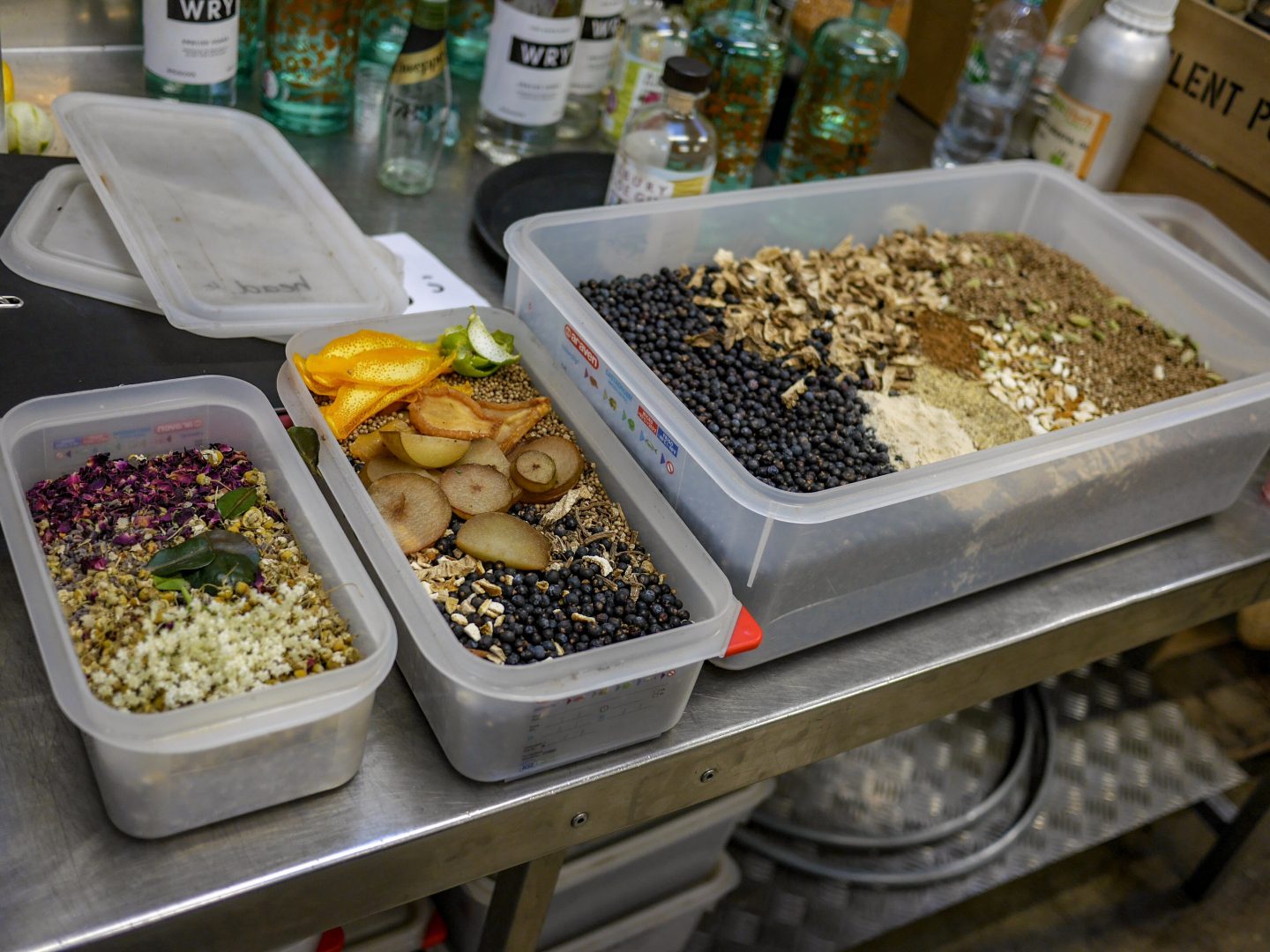 Obviously there was some gin tasting going on too!  Last year I made Sloe gin and I have now picked up a new one to make at home this year, Damson gin. 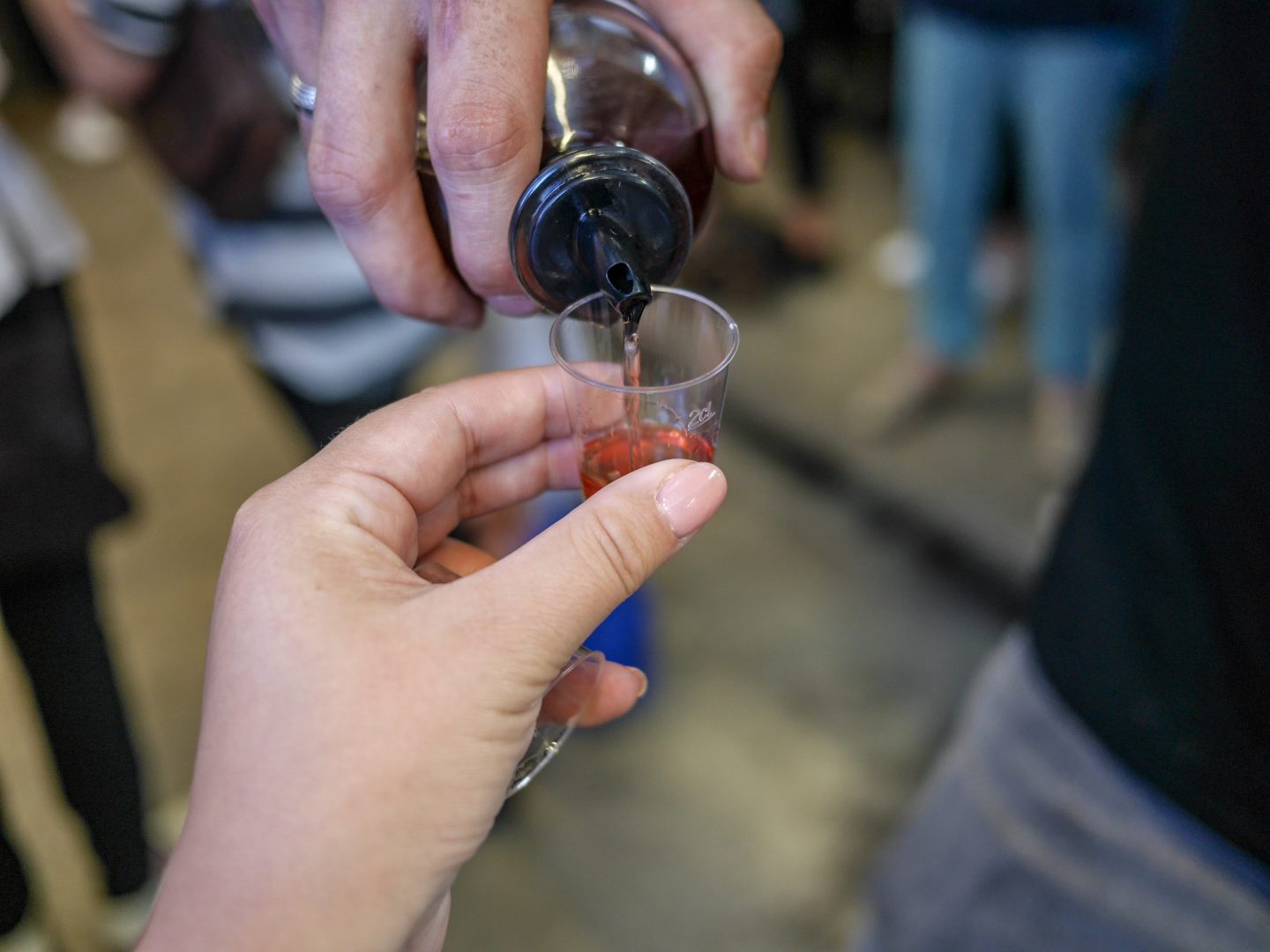 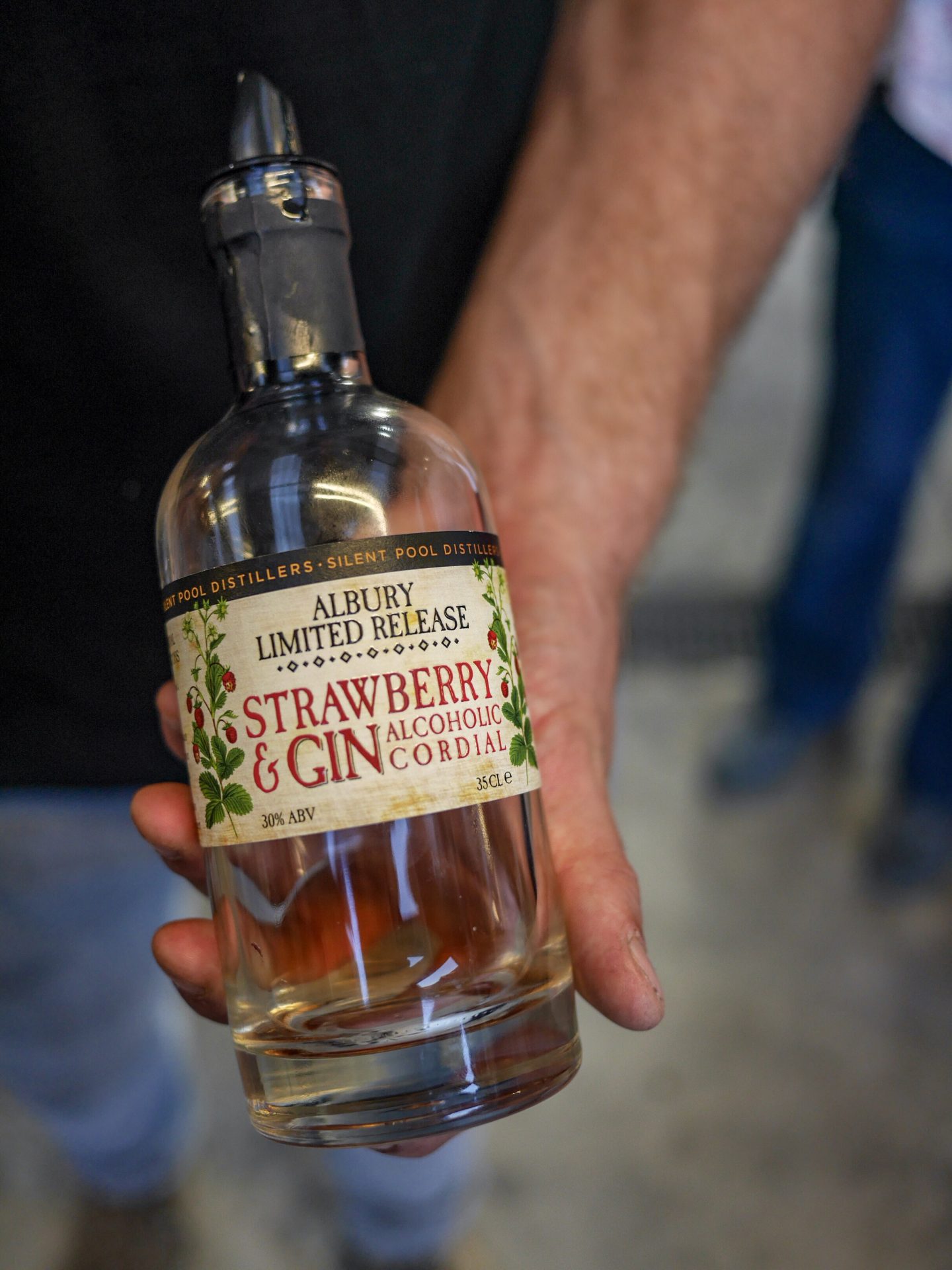 By means of finger dipping we even got to taste their gin tea infusion, this forms stage two of the four-stage process. If you are wondering about the bacteria build up if yours is the last finger to dip then rest assured as this vibrant green liquid is 96%! 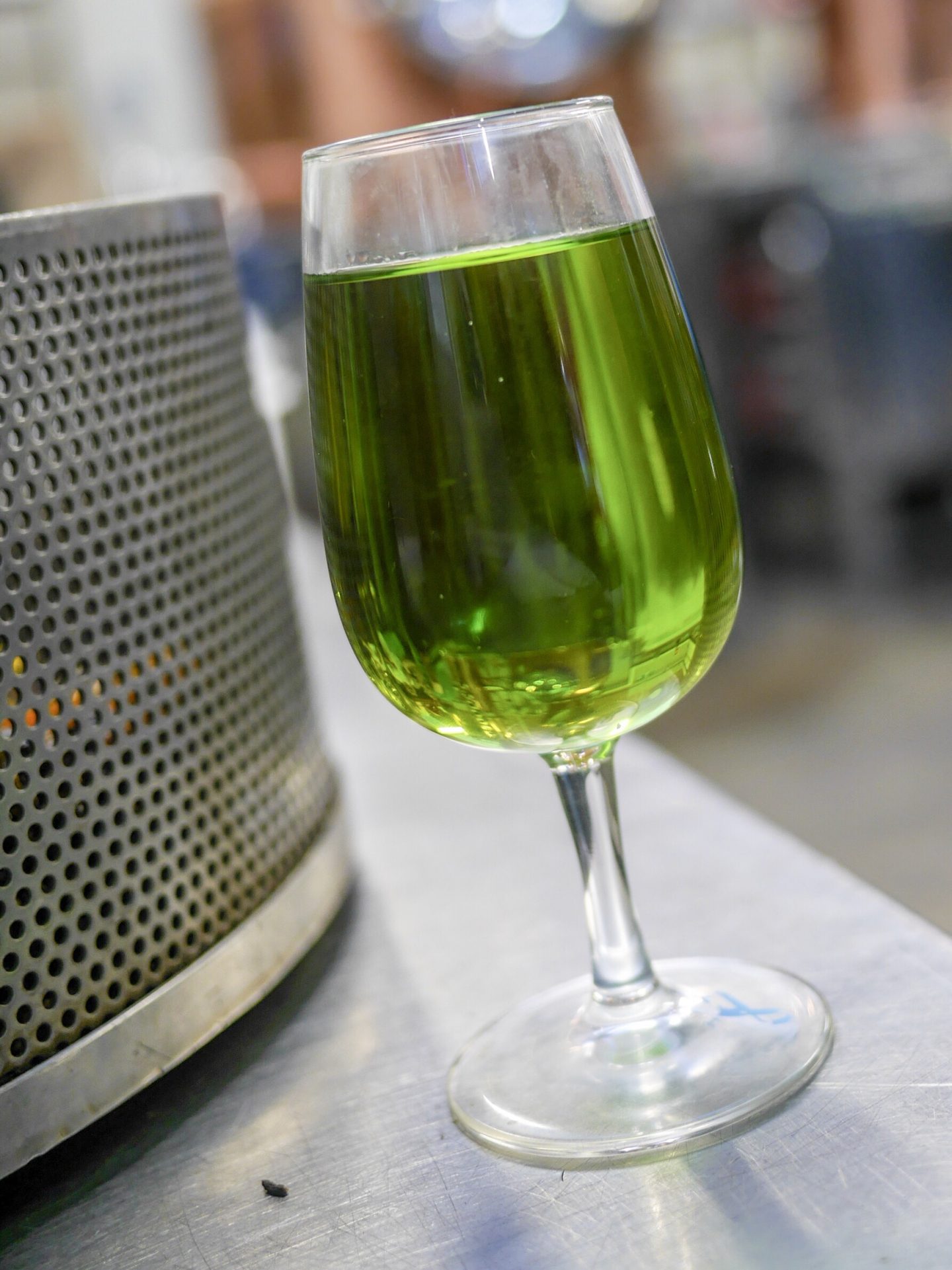 There are two pools at the distillery one being a tranquil haven where wildlife and nature thrive. 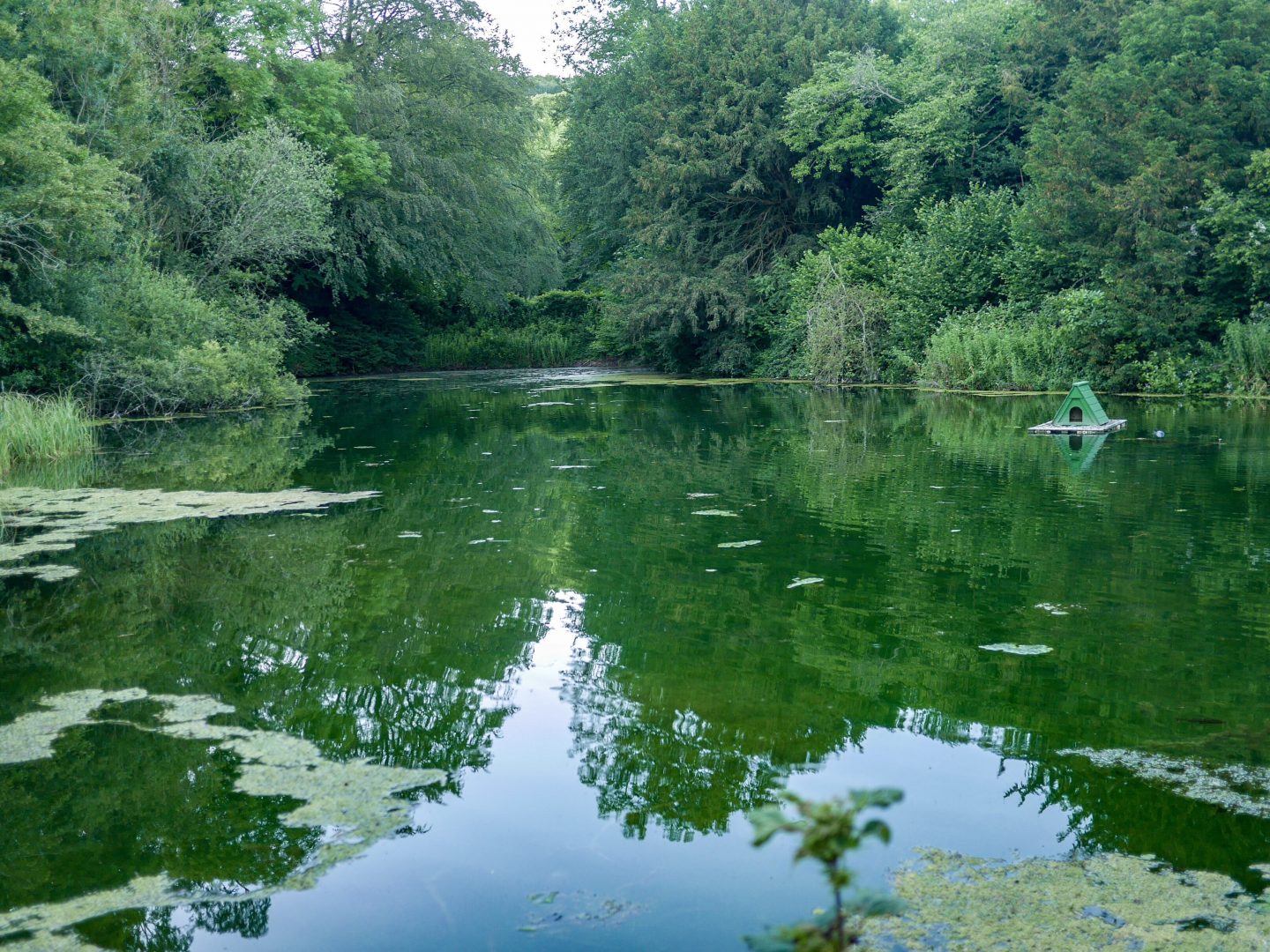 The other is said to be haunted, and even today there is little life surrounding it and apparently hardly any wildlife visits here, our tour guide said that in all his time here he has never once seen a duck  landed on the water. 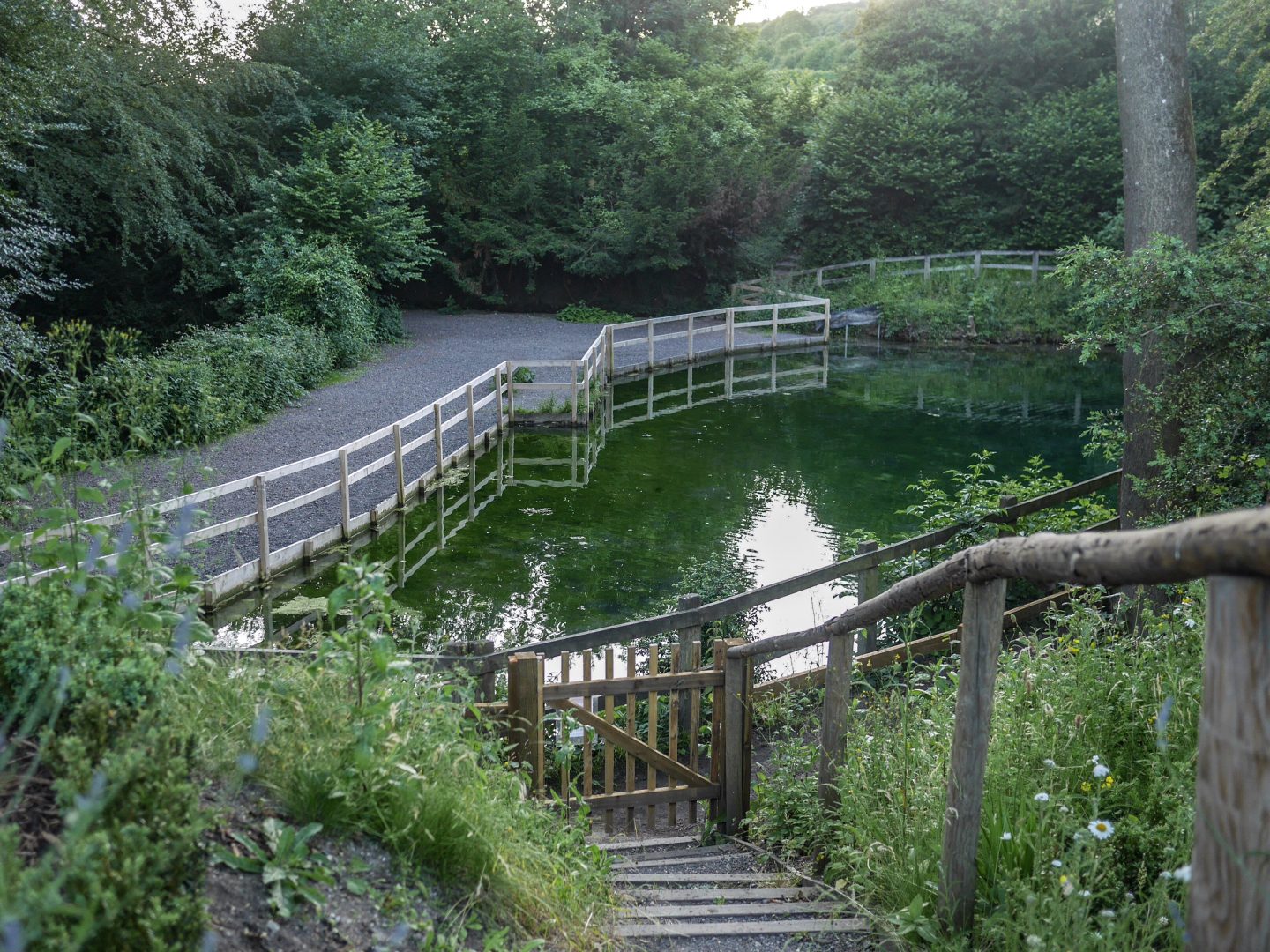 Legend has it that many centuries ago a woman called (Emma of all names), the daughter a woodcutter from a nearby village, would often visit the pool to bathe.  On one of these visits she noticed a nobleman atop his horse watching her, upon the man realising he had been seen by Emma he began urging his horse towards her.  Emma was fearful and retreated away from him towards the pools deadly depths. The man kept coming towards her forcing her in to a place where the water suddenly deepens, unable to swim Emma slipped beneath the clear crystal waters of Silent Pool and drowned.  I found this haunted history so intriguing that I continued to delve in to it deeper when I got home and was surprised that the pool also featured in the mysterious disappearance of Agatha Christie in 1926.

If you look closely at any Silent Pool bottle, you will see that they have cleverly woven in to it the legend of Silent Pool by means of a man astride his horse and a woman who appears to be falling.

After our tour was over it was time to stock up on, well….gin! 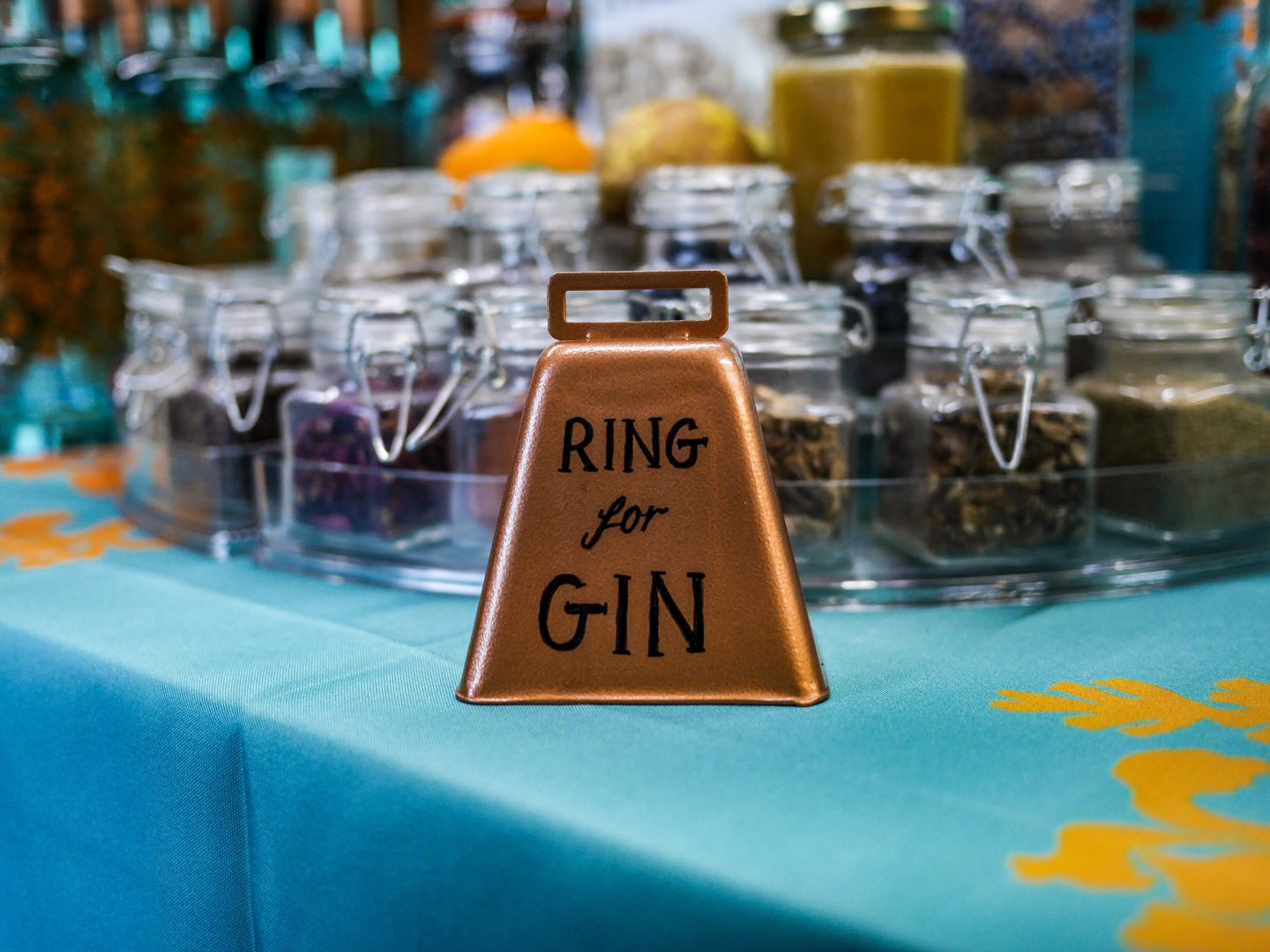 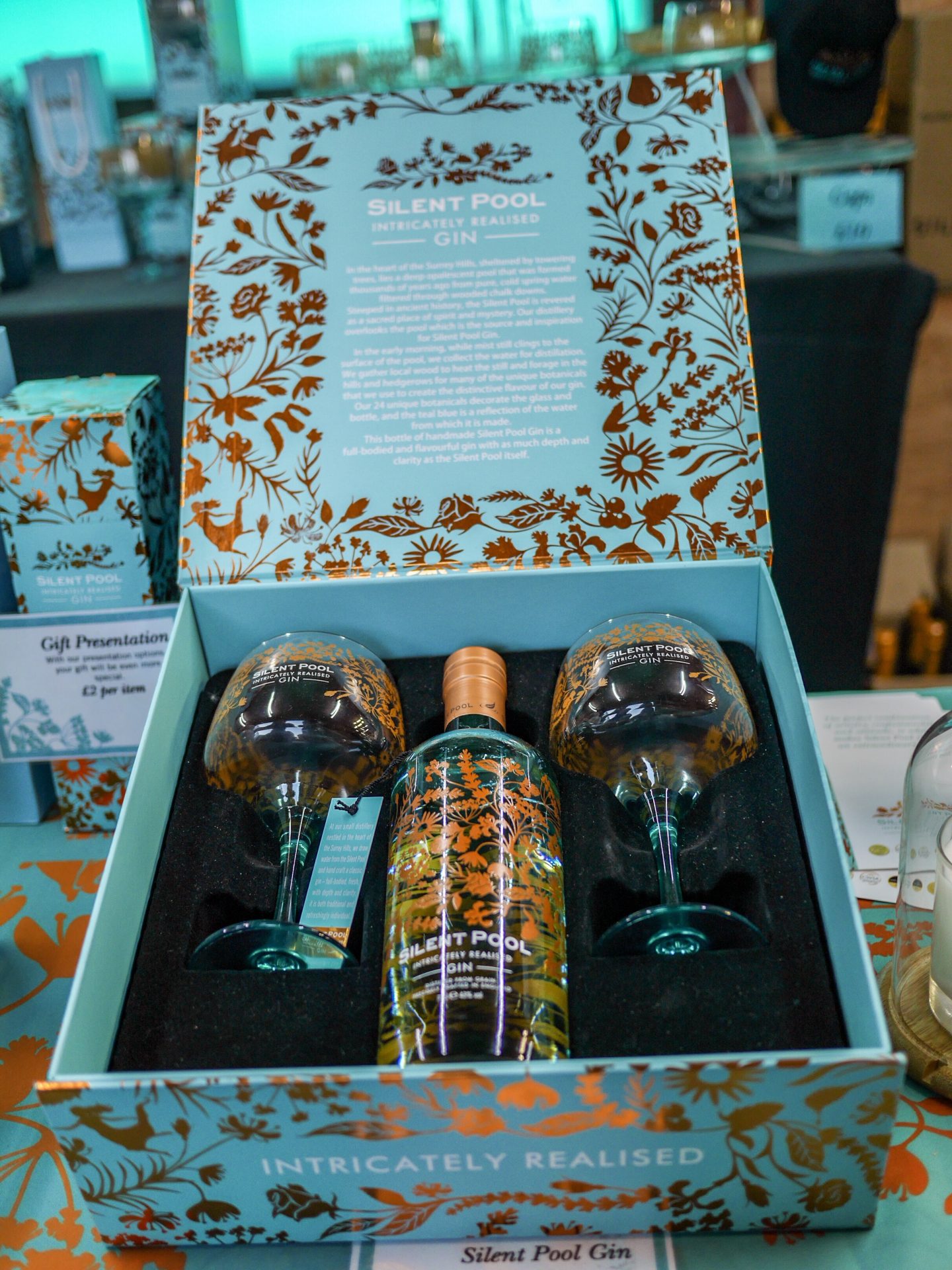 If you are a gin lover and passing by Guildford anytime I can highly recommend a visit to Silent Pools distillery either for a tour or to pick up a bottle from the shop which is open 7 days a week.  Otherwise why not pick up a bottle online here   or even at either  Waitrose or Marks & Spencer (also available in other stores).

If I heard accurately they are set to bottle 500,50 bottles in 2018 and it’s great to see this local Home Counties award winning gin going from strength to strength.