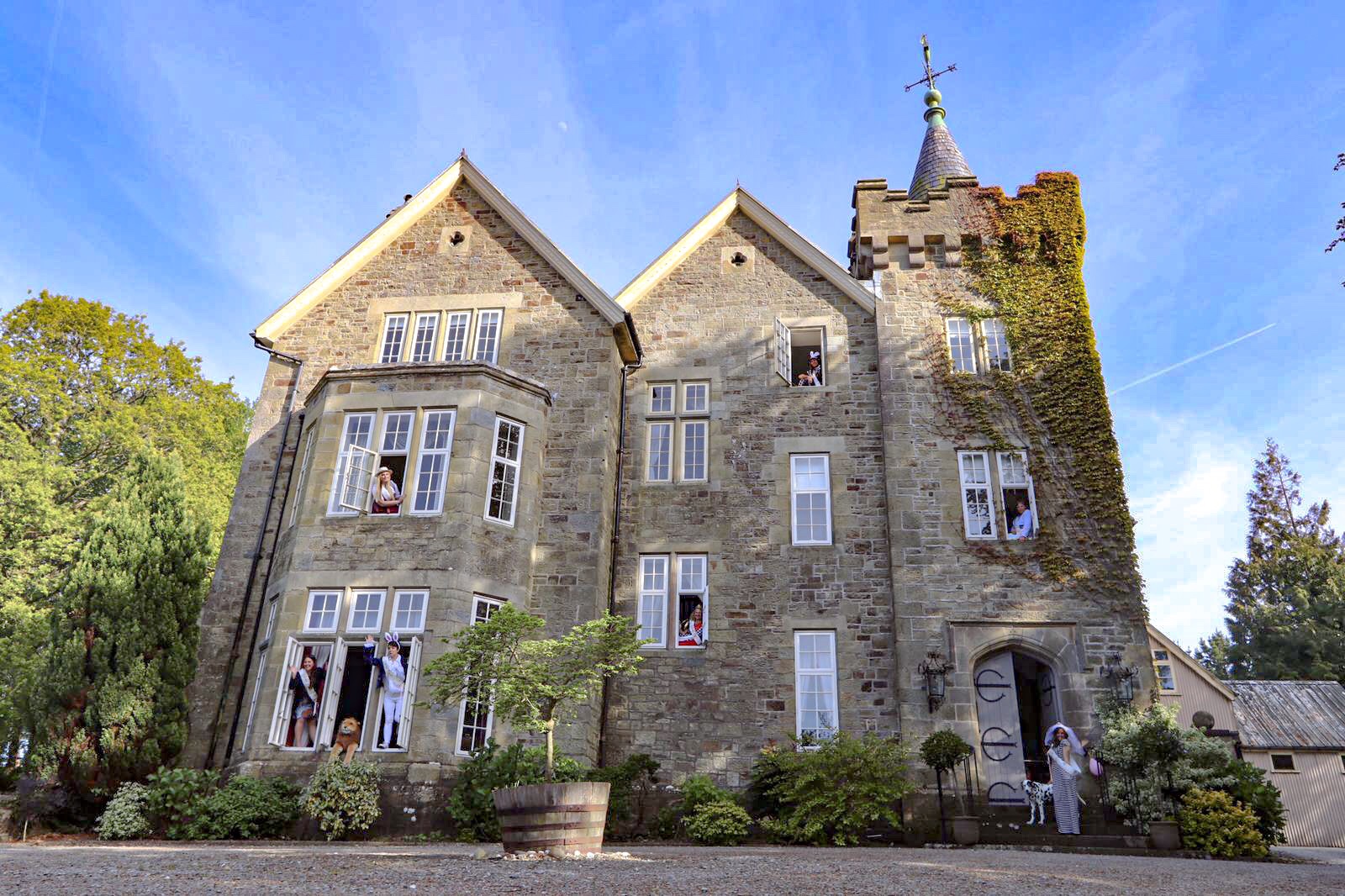 My big sister, and MOH Hannah was left in Complete control of my away hen do, and what an unforgettable few days away she created, not just for myself but all the ladies who were able to come.

The Monday before we left for my hen do Hannah gave me an envelope which contained all the details, and I could hardly contain my excitement once I knew where we were going. We were leaving Friday for a three night stay at a country house in Wales, booked through my favourite luxury self-catering stay-cation provider Unique Home Stays.

The morning we left my stress levels were HIGH. Including myself, there would be four of us plus Shiva and all our luggage bundled in to my car. Thankfully we had managed to send at least one large bag on its way in Hannah’s car earlier in the morning.

Knowing how anxious I was about space in the car, when my friend Lucy arrived and asked me if I was ready to see her suitcase I almost shrieked when I saw the size of it! Yet somehow we managed to make it all fit (just). A roof rack is now on order!

A couple of hours in to our journey, we were all feeling hungry so pulled off the motorway and found the perfect pub for us, it was called The Spotted Dog! Needless to say, Shiva went down very well. The owner and her mouse trick training daughter made us feel very welcome. Yes, you read that right, the daughter trained her mice to do tricks!

When we were replete we hit the road again and spent the next couple of hours stuck in Friday afternoon traffic. Our frustration after hours in the traffic was soon forgotten when we arrived. From the moment we pulled up outside the gates of Florin (for the second time as we had already passed it once) and the tree-lined driveway this very special home took my breath away.

Upon reaching the front of the house the girls who were ahead of us had been busy decorating the house for our arrival and were out on the doorstep singing us in to The Shirelles, Going to the Chapel.

Entering the house, I immediately felt that this was a home full of stories and happiness, it felt loved and full of love.

The house has seven luxurious bedrooms meaning that most had a room of their own.

Each room in the house had its own personality and a view overlooking the wraparound garden.

There were many many quiet spots to sit and relax.

Hannah and I were to share a room, (just like when we were little girls talking in to the night), and as MOH and Bride to be we had first choice on which room. Our course we had the most decedent of all, the master suite which had the most striking four-poster bed I’ve ever seen! Leading on from the bedroom was the most gorgeous en-suite bathroom where the focus point was the claw footed bath, which for someone as tiny as myself was big enough to swim in!

As soon as we had all claimed our rooms, we had a quick freshen up before heading downstairs for supper and a glass or two of bubbly. We sat down to a feast of lasagne and salads which my lovely aunt Kim had prepared earlier; we even had party bags which had be kindly provided by one of the girls who were unable to make the trip.

I was rudely awoken at the crack of dawn the next morning by a demanding Shiva hungry for her breakfast. Once Shiva had eaten I poured myself a coffee, pulled on my boots and the two of us went out to explore the gardens.

As the house began to wake up text’s started coming through to see who was up and where we are were. We began to gather around the tables in the courtyard, sipping on coffee while basking in the sunshine beaming down on us planning the day ahead.

After eating a delicious breakfast cooked by Lili, we went out for an early afternoon jolly to the beach and to visit a local harbour or two.

While walking on the beach we quickly became aware of an abundance of enormous jellyfish that had washed up. As we stood staring over one intrigued, a guy that had a striking resemblance to Jake Sparrow came up with his Collie and chatted to us about the jellyfish before picking it up and throwing it back out to sea. He reassured us that these jellyfish were harmless. I on the other hand was not so sure!

After our walk on the beach, we took a short drive across to local harbour (New Quay), for a drink of local cider while taking in the ambience. For a Saturday afternoon it was busy but not as busy as I expected and we were able to park up quickly, I would imagine this is a very different story come the summer months,

We had planned to have supper out but decided we would rather be at the house and making the most of it, so instead of eating at the picture-perfect Harbour Master we stopped in for a drink instead.

After our drink in the sunshine we collected a fish and chip supper and headed back to the house to eat.

We set the table and ate in the fabulous glass fronted summer house.

It was here we stayed for the rest of the evening, making the most of the hot tub, drinking laughing and toasting marshmallows over the fire pit.

Sunday we had a slow morning before jumping in the cars to venture out to another beach, well all but one who was suffering from the night before.

While we were at the beach, in the distance we could see dolphins jumping in and out of the sea and although they were distant it was special to know that they were there.

Back at the house in the afternoon I was banished to my room so that the girls could set up a surprise. I was not going to complain as it allowed me time to indulge in the amazing bath tub that I had been keen to immerse myself in since arriving. And so, with a glass of gin (a bottle of my favourite had been kindly gifted for the hen do by Hannah at The Gin Inn), in hand I headed up to my room for a soak.

Hannah had left me a bag on the window seat and said I was to wear the contents after my bath, and Lucy text to say let her know when I was out of the bath as she would be coming up to do my hair. How nice I thought.

I was somewhat confused when I delved in to the contents of the bag and pulled out a pair of bunny ears and fluffy tail. I called Hannah and she informed me that hers, mothers and mine had not arrived in time. Even more confused at this point. Lucy came up and did my hair and then disappeared. Then my mother arrived to collect me. Looking a little odd with funny glasses and pink cheeks, apparently they were drawn on hearts. (I think she has had to many bubbles when drawing them on)!

Downstairs and walking through the closed curtains which lead out to the courtyard I was confronted by the mad hatter’s tea party in full swing! Minus Alice who I was meant to be, although anyone who knows me will know that The Mad Hatter is more fitting!

As the afternoon turned to evening it was back up to the summer house to enjoy the last night together.

Some were more sleepy than others.

When Monday came and it was time to leave, I think it’s safe to say we were all feeling rather upset to be leaving Florin. This beautiful Victorian country home really is straight out of a fairy-tale, sitting in a plot of five acres of enchanting gardens, with hidden treasures at every turn inside and out, from swings, summer houses, fire-pits, hot tubs, tree houses, fountains, outside pizza ovens and even a bookcases that turn out to be secret door.

Our stay was made even more special with thanks to the generous and thoughtful owners who had said to enjoy the house and everything in it. We were left with freshly baked welsh cake, bread, eggs, milk, cheese biscuits, wine and so much more. Everything was catered for, despite being self-catering.

We all came away feeling rejuvenated, (possibly the most civilised hen do ever), with many fond memories and new friendships formed. I feel very lucky to have such wonderful friends and having many of them all together for a few days was so special. It was everything I could have wanted and more.

With under two weeks to go until the big day, this will be my last blog post until after the wedding as things are going to get crazy busy!