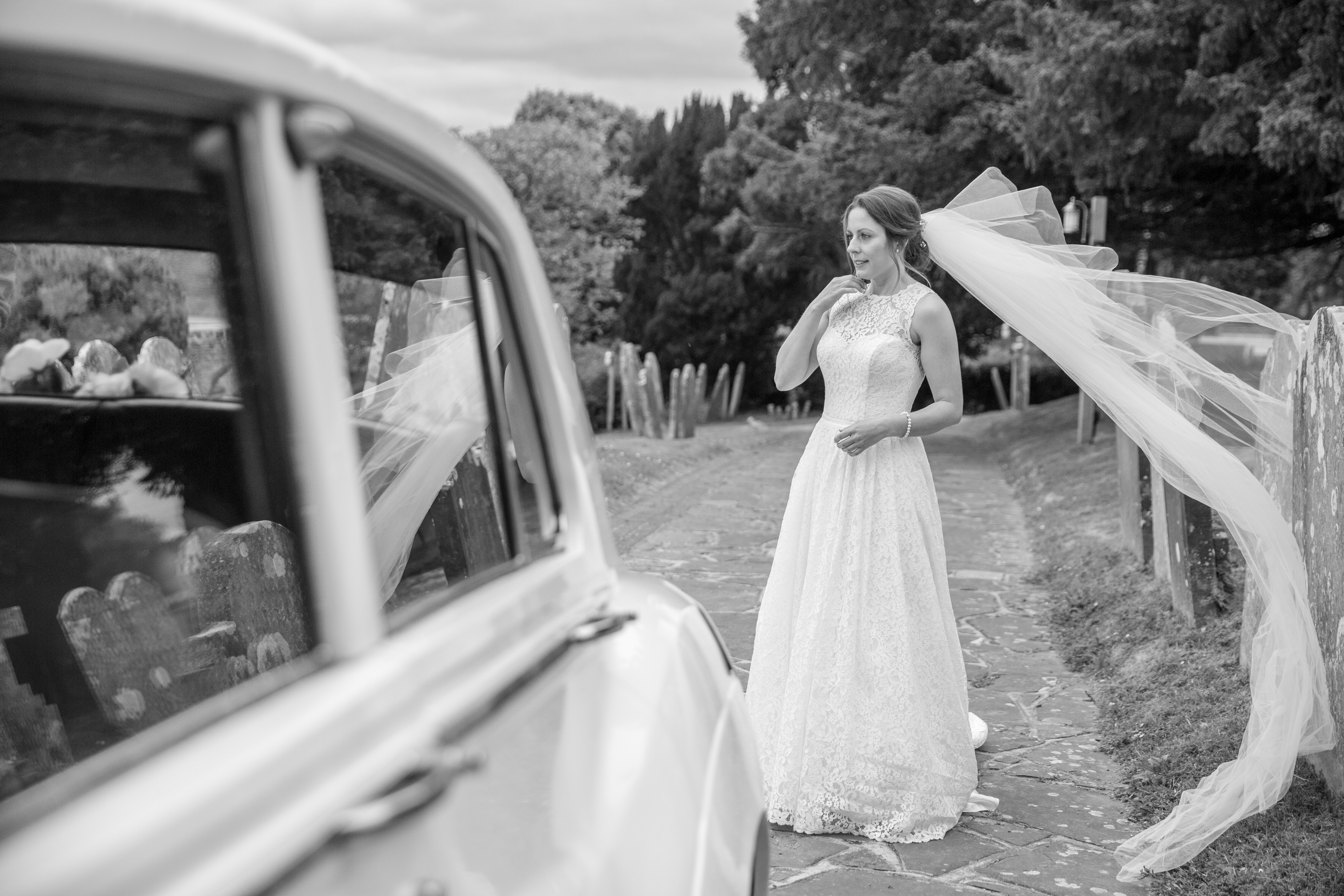 Your wedding dress will be the most important dress you ever wear, and you have probably imagined exactly what this looks like before even trying one on. I know I had.

I had envisaged my own to be that of a tight fishtail lace dress with a low back. Yet when I found my dream dress the only similarity to what I had imagined was the lace part!

I started out on my wedding dress journey by seeking advice from my Instagram friends as to their recommendations on bridal boutiques. The messages came flooding in, and thanks to one of my lovely followers that same night I found my dress. I was looking online at one of the suggested boutiques when I came across a dress I was blown away by, the problem was there was no price listed on the website (never a good sign). I contacted the boutique to enquire about the dress and shared what I considered to be a healthy budget for my dress. I never did hear back from them.

I continued to look online to see if I could find a price and then I came across my actual dress listed on a site I never ever thought I would turn to for my wedding dress, Preloved. The dress was in a size 8 which was my size and was listed within my budget. I could not believe it and emailed the seller immediately.

I was so excited about the dress I could hardly sleep that night. I just knew it was the one and I had to have it, pretty much how I felt the night I met my husband!

After a day or two had passed I received an email from the Preloved seller. The seller was surprised I had found the dress online as she thought she had taken the advert down after deciding to keep the dress after all. Her listing had been done in hast, and as she no longer needed the money and felt heartbroken at the prospect of selling dress took it down or, so she thought. I got off the phone feeling deflated.

Trying to put the dress to the back of my mind my mother and I visited a lovely boutique in Lindfield where I tried on a few dresses. One of which was exactly as I had originally imagined my wedding dress would be for so many years. As much as I loved it and it felt incredible on, I still had the Caroline Castigliano playing on my mind.

The following weekend I booked and paid for an appointment at the designer’s flagship store in London. With my mother and sister by my side all with a glass of bubbles in hand, I tried on a few dresses saving the dress of my dreams as the last to slip on. I had been under the impression the dress was a size 8 (it later turned out this was likely to be more of a 10 or 12). With teary eyes I came out of the dressing room to my mother and sister waiting to see the dress I had been so excited about. My sister also had watery eyes while our mother showed the same level of enthusiasm as she had with all the dresses and simply commented on how lovely it looked.

I then discovered the price and I knew I was in big trouble. One, how on earth would I pay for the dress of my dreams and two, how would I break the news to Chris? After floating about in the dress for sometime, I said I would think about it and walked away despite my mother trying to persuade me otherwise. I could not warrant spending the same amount of money on a dress that had been paid for my first car! A dress I would wear for one day only, regardless of how much I loved it.

After the fitting the three of us went to the Dorchester for afternoon tea. Out of the blue the lady who had been selling the dress called. After having a change of heart she would after all like to sell the dress, and asked if I would like to go up the following week to collect it from Wiltshire. I was over the moon and arranged a time to collect.

Remember the dress dilemma I told you about in the post A romantic Getaway? Well here it is, or the beginning of it. While Chris and I were on our romantic night away the seller called me to say that while she was still willing to sell the dress, she had looked at the current market price and wanted to double the price! She said one of her friends was also interested in buying it and she felt she had under-priced it. I was frustrated but the dress was still within my budget, I suggest an alternative price to which she thankfully accepted. Phew. Or so I thought.

The following week my mother and I travelled across three counties to collect the dress. Unfortunately, or fortunately as it turned out I did not try the dress on.

Arriving back at my mother’s hours later feeling proud of my beautiful and immaculate dress, I went straight up to my old bedroom to try it on. It was all going well until half way up my back the delicate buttons were 4 inches apart from being able to button up. I had a meltdown. My friend Jill came over and while I was still in the dress tried to calm me down with a more rational thought process that I had at the time. Jill and my mother assured me it would be fine and that a good seamstress was all I needed. To top it off, Chris who had been passing by, decided to stop in and say hello and came running up the stairs, unbeknown to him I was trying the dress on. He claims to this day all he saw was white before turning quickly on his heels and running back down the stairs. For someone who is superstitious this was yet another disaster.

I found a remarkable seamstress, Miss Kay over in Tunbridge Wells. During my first fitting, there was a lot of excitement from the ladies in the shop about the dress coming in and I received so many lovely comments about how perfect and pristine it was. This reminded me why I had fallen in love with my dress in the first place. It was a very special dress or as Miss Kay corrected me it was more than a dress it was couture, it felt special again and I came away feeling relieved and that my dress was in the best possible hands.

Being reunited with my dress at the fittings became a highlight of the lead up to the wedding, I am sure this is the case for all brides. Aside from getting to see and wear my dress, it was an afternoon out with my mother where we would always find a nice pub to stop at on route or a nice spot for tea and cake. I will forever cherish those times together, driving through the seasons over to Tunbridge Wells.

Miss Kay made the dress my own, I never felt that I was wearing someone else’s dress. I mean really these dresses get worn once, once in a lifetime normally and what a shame when so much goes in to making them, environmentally as well as the time and detailing.

The night before the wedding I stayed in my old bedroom and had the dress hanging up at the end of the bed. I was so excited that the next day I would get a whole day to wear her.

The dress had pockets which was one of the reasons I think I was taken by it in the first place as most of my favourite dresses have them. In one of the pockets my bridesmaid Lili, had carefully sewn in my “something borrowed” a handful of my Beautiful Grandmothers pearls from a necklace she had been meaning to have restrung. The pearls still smelt of her perfume and at any point I was able to reach in to my pocket and know she was there with me throughout the day. The other pocket contained dog treats!

For my “something blue” I slipped on my beautiful and comfortable pale blue wedding shoes by Charlotte Mills. After the ceremony I popped some heel savers on from Clean Heels. I dread to think of the state they would have otherwise ended up in had I not had my heel savers on.

My “something new” were my pearls from Chris, stud earrings and a bracelet.

My “something old” was a horse shoe from my first Pony Dido, this was painted and my farrier drilled two holes in it so that I could put some rustic rope through and hold it with my bouquet.

After the wedding, the dress dilemmas were not over as the designer was unwilling to provide me with the care instructions as the dress was not purchased directly. This left me with a dirty dress and no dry cleaner willing to clean it without the instructions. In the end I called around some of the designer’s stockists who were far more helpful and polite, one recommended that I use the provider they always suggest to their brides, Terrington Burchett. This is where I boxed and sent my dress and veil to for cleaning. Both arrived back some weeks later beautifully boxed and clean. I expect the veil will be coming back out soon to be hung over the baby’s cot!

As mentioned earlier in this post, I never for a second thought I’d buy a second hand dress, however it was the way I managed to get what turned out to be the designer dress of my dreams, and looking back I would do it all over again. I came across a site while trying to find my dress called Still White and if you are looking for a designer dress on a budget and not fussed that it has already been worn once then I can recommend you start your search here.

Lastly, I need to mention my dear Grandad. He did something that I know my Grandmother would have done had she been here to do so, he gifted me my wedding dress. Is that not the best wedding gift one could give?