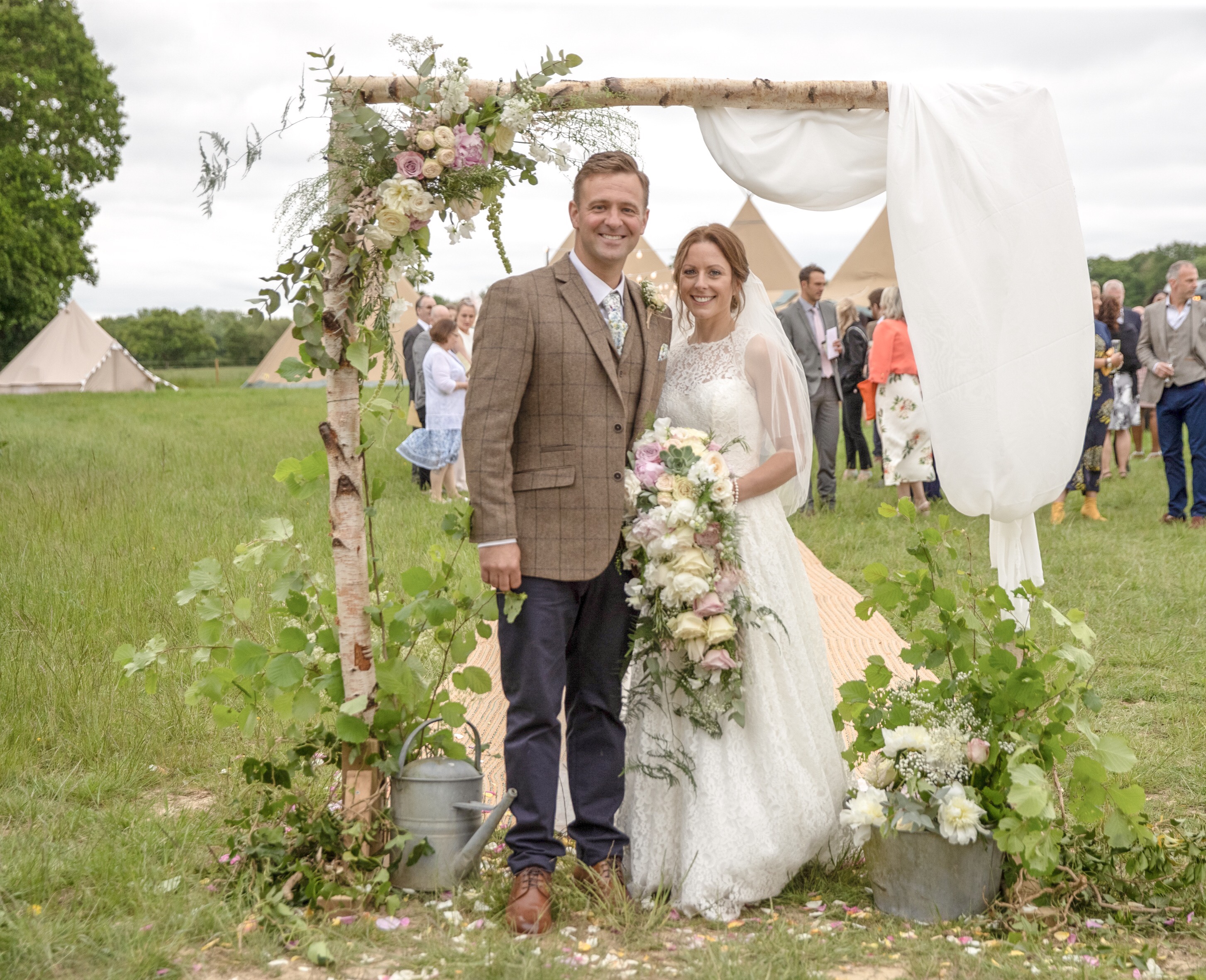 Chris and I had often spoken of having our wedding reception at my Mothers, even before we got engaged. It’s a place we both love and a place that already held many fond memories for us. Having it at home also allowed us complete freedom to plan every little detail of our wedding. The result was a day that was truly bespoke and personal to us with lots of DIY touches. We wanted a day to celebrate our love surrounded by all the most important people (and animals) to us where everyone could feel relaxed and have a fabulous time.

We decorated jars with hessian and lace for the table flowers, and filled ramekins with nuts as nibbles.

Wicker hearts were pinned up around the tipi’s.

The tables were named after our animals – both past and present.

Our favours were homemade sloe gin for the adults and jars of sweets for the children.

When we started out on our DIY wedding planning journey, neither of us knew just how much we would have our work cut out, from sourcing Tipis, right down to teacups! We hand-picked all of our suppliers and I must say we chose exceptionally well.

With the help of our friends and family, we made many of the props and finer details ourselves. My Grandad was especially helpful in the wood work department and upon being supplied with a picture went off and made a wishing well, silver birch archway, the signage and the most amazing ice cream serving stand. We really did put our hearts and souls into the wedding, and I feel that this really showed on the day.

The days leading up to the wedding we had the help and support of some of our closest friends, and together we all worked tirelessly to set up for our big day in the wind and pouring rain at times.

Keeping to tradition Chris and I spent the night before the wedding apart, (well once we had finished the final touches in the tipi’s). We kissed goodnight and he went home while I stayed at my mothers with my longest suffering friend Josie.

Josie and I grabbed a couple of bottles of homemade sloe gin (surplus to requirements), and walked our four dogs up the fields. I took the tipi’s in one last time before I would be entering them the next day as a Mrs.

From 7 am the champagne was flowing, and I felt relaxed being surrounded by almost all of my most dear girlfriends. Breakfast was cooked for us as we chatted, it felt like we had all the time in the world.

Despite feeling like we plenty of time, it suddenly dissapeared and I had a mad dash to hand out the gifts and get everyone out the door. Once I had sent everyone on their way to the church, my Dad and I locked up the house and it then dawned on me that Chris’s gifts to me (pearl earrings and bracelet), were still sitting on the dining room table. Without keys or a phone, I desperately tried to find the spare keys, running around the stables and garden with our chauffeur opening gates for me whilst the lovely Charlotte who did hair and makeup held up my dress. Eventually after managing to get back in the house, I arrived at the church 30 minutes late! Apparently, the vicar said I refused to leave the house without my bling! Glad he had a sense of humour as mine had run out by this point.

Once outside the church and seeing Shiva immediately (our ring bearer) I relaxed once more before making the walk to meet my best friend and future at the altar.

We went traditional with organ music at the church, I walked down the aisle to Canon in D, Johann Pachelbel and we walked out hand in hand as husband and wife to Wedding March, Felix Mendelsohn.

On exchanging rings we discovered Chris’s ring was too tight (three times since the wedding he has had it resized now)!

When my Dad was called up to do his reading he looked bemused. It came to light that all those months ago when I had asked him if he would do a reading he had forgotten, and as such did not have it printed. Thankfully the reading went ahead in the end, good old iPhones and Google. And my Dad read “Falling in love is like owning a dog” by Taylor Mali, prior to which Chris Best Man read a piece from one of my favourite books, The Alchemist by Paul Coelho.

The ceremony passed in the blink of an eye and we were soon travelling to the place I often refer to as “my haven” with Shiva at our feet.

We would have loved to have had Bunter there with us but he is such a whirlwind he would have caused absolute havoc for all!

Before pulling up to the reception we took some time to drive up to the end of the lane for a few quiet moments together and to have a few pictures.

Arriving back at the farm for the drinks reception where we had the lovely Wildlight Duo playing softly in the background.

Walking in to the Tipi’s as Mr & Mrs felt magical after so many months of dreaming up our day and seeing it all come together so perfectly.

Shiva and Bunter along with Josie’s two dogs and my Grandad’s dog spent more or less the entire reception with us, until late evening and they started tucking into the remainder of the food! Thankfully everyone had eaten by this point. We even had the neighbour’s dog join us for a couple of hours. Literally he just appeared trotting up the walkway and seemed very much at home.

By myside as my Maid of Honour was my big sister Hannah, and my bridesmaids were two of my cousins Amy and Alice along with two of my closest friends Jill and Lili.

We even had Daya involved (unwillingly) in some photos, she was not on her bestest behaviour as she was distracted by all the lush grass to be eaten and the band blaring out. Shiva and Bunter followed along of course. In fact Shiva hardly ever left Chris’s side all day, even when he was doing his speech she was between his legs the entire time. She also joined us for our first dance!

Our local florist did a fantastic job with the flowers; everything we had envisaged with the flowers was as we had (or I had) dreamed it would be right down to my first pair of Dubarry boots being incorporated in the arrangements! Being a spring wedding meant we had lots of choice on the flower front and we chose roses, gyp, peonies and succulents all of very soft pastel tones, sage green, pale pink and white.

Catering wise we went with a well known local organic hog roast supplier who did a fantastic job catering for all tastes. We then had ice cream served from my Grandad’s greatest pallet project yet. The ice cream serving station. We had lots of flavours of ice creams with a variety of different sprinkles to choose from.

All of the food was served on Eco friendly palm leaf platters with matching cutlery.

From the two of the four flavors of our cake I tried it was delicious, from top to bottom tier we had rose petal, (currently this tier is in our freezer and I can’t wait to try it)! Then we had champagne and strawberries, followed by white chocolate and raspberry with the bottom tier being that of elderflower and lemon. The cake looked as perfect as it tasted sitting on the stand made by Horse Shoe Hearts which was supported by shoes I had collected from Daya.

As well as having welcome drinks and wine on the tables, we were also lucky to have the wonderful Hannah and her husband from The Gin Inn keeping the drinks flowing all day and night! Outside we had their converted Rice Horse Box which served all the gins you can imagine, (gin cocktails were made up named after our animals), inside the tipi’s there was a rustic bar serving everything else.

My cousin Kirsty was unable to make the wedding, however to still be part of our day, Kirsty wrote and sent us a lovely poem all the way from Bolivia with love. Her sister Jessica read the poem to us during a quite moment in the afternoon.

We had a second band in the evening called Rockit who really got the dance floor filling up.

They sang “have I told you lately” for my very emotional father and I, after which they sang our first dance as Husband and Wife, A Thousand Years by Christina Perry.

Aside from all the beautiful blooms, we decorated inside and out with lots of fairy and festoon lighting and bunting. Haybales were turned in to sofas under the little hat tipi where the welcome drinks had been served.

Towards the end of the night my new husband and one of his brothers randomly in their intoxicated state decided to put on a striptease! Thankfully they kept their boxers on at least, plus my mother had slipped away to bed at this point and did not witness this display by her new son in-law! I do have video evidence thanks to my friend Lucy. I often threaten to put this on YouTube when he misbehaves!

My Grandad changed in to his dancing shoes after spending the day forcefully in a pair of shoes that were too small!

Depite knowing that my dress had a hook for the train, no one could find it, perhaps too many gins had been consumed. I did not let this stop me having a good time on the dance floor!

In the early hours of the morning when there were only a few friends left standing, my girls walked me barefoot across dewy field to our cute bridal tipi and tucked me up in the double bed under many duvets and throws with a slice of wedding cake! Meanwhile Chris and a couple of his friends turned the lights out on what had been the most magical day we could have ever wished for.

We worked with, and can highly recommend the below suppliers who helped to create our wonderful wedding.