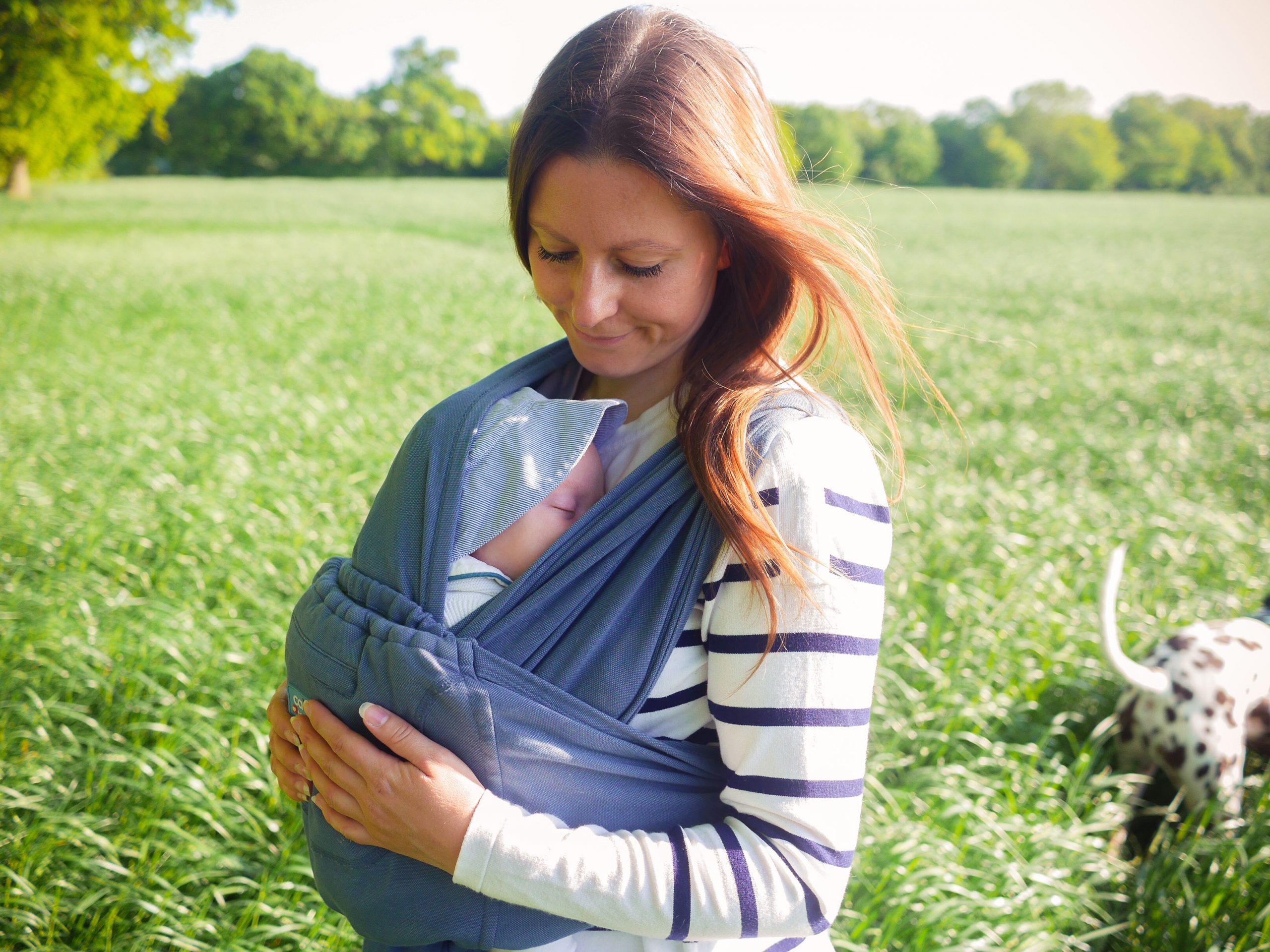 Before Rupert’s arrival (Birth Story HERE), I had never considered babywearing as a “thing”. I somewhat naively just assumed it would be practical to have a carrier for walking the dogs. It had therefore not occurred to me that I would need to or even want to wear Rupert for any other reason, after all we had splashed out on an expensive pram for outings and when at home he had a bedside crib and a Moses Basket, so why would I need to babywear?

It turns out that Rupert hates not being held and as much as I love holding him close, I was finding that I was achieving absolutely nothing in a day due to him needing to be constantly held. I soon saw the benefit of using the carrier at home as it would allow me the opportunity of getting things done which would otherwise gone undone. It quickly and naturally became part of everyday life and not just something to be done when out walking.

One evening I was exchanging messages with a friend in Canada who happened to mentioned how much she enjoyed wearing her babies. There was something about the way she spoke of it that then lead me to google it in more detail and from there I discovered that there was a whole world of babywearing going on that I had been oblivious to. Additionally the benefits I had slowly been picking up on were written in black and white as well as others I had been unaware of that we would have unknowingly at the time also been benefiting from.

Here are the reasons I love babywearing:

Womb with a View! Many of you know that Rupert arrived early which resulted in a two week stay in hospital. In hospital he slept fine and was a settled baby. However, this all changed when we waved goodbye to the NICU. Rupert should have had another six weeks of womb life and I found babywearing has been helping with the transition from the womb to the outside world. Unknowingly when I started by wearing him I was creating a womblike environment offering him a place of comfort and calm, after all  he had been used to being carried for 7 and a bit months and more or less accustomed to constant movement.

The Cuddle Factor! We missed out on many cuddles in the NICU and by babywearing we are making up for all the early cuddles we missed.

Time to Bond, by having Rupert close to me much of the time I feel it has supported with our bond.

Reassurance, for both of us! Being able to keep constant visual and physical contact with Rupert when we came out of the hospital was exactly what we both needed after our rocky start and not always getting to have the closeness that babywearing gave us.

Wellbeing, I know that when I am wearing Rupert he feels his most secure and contented. I have since read that babywearing helps to encourage and build a foundation for developing self-esteem.

Stimulation, as we get on with our day I know Rupert is developing a better awareness of his new world as I can see it with my own eyes as I follow his interest.

Less Crying, Rupert suffers from acid reflux and colic which initially before I was wearing him resulted in a LOT of crying. Now that I am wearing him more often than not, the crying has lessened as the carrier is his happy place where he feels most relieved of his symptoms.

Practicality, I can be hands free to go about our day together, from walking, tending to the horses, the house, even blogging! Yes, I am wearing him as I type this!

Good Exercise, I always joke to Chris I am losing more calories than him as I have a constant (at present 10lbs) weight attached to me.

Inexpensive Alternative to a Pram, now I am not saying that in hindsight I would be without our pram as it has its place yet had money been an issue babywearing could have been the solution.

More Sleep, for Rupert anyway! Rupert is a poor napper, however as soon as he is popped in his carrier, he is off in his dream land and snoring away to himself.

I did not know at the time we were gifted a Caboo from Close Parent just how valuable it would come to be to both Rupert and I. It actually makes me feel a little emotional when I say that its quite possibly been the best item I have been gifted from a brand.

Babywearing, has made life so much easier for both Rupert and myself, I honestly can’t imagine doing things any other way.