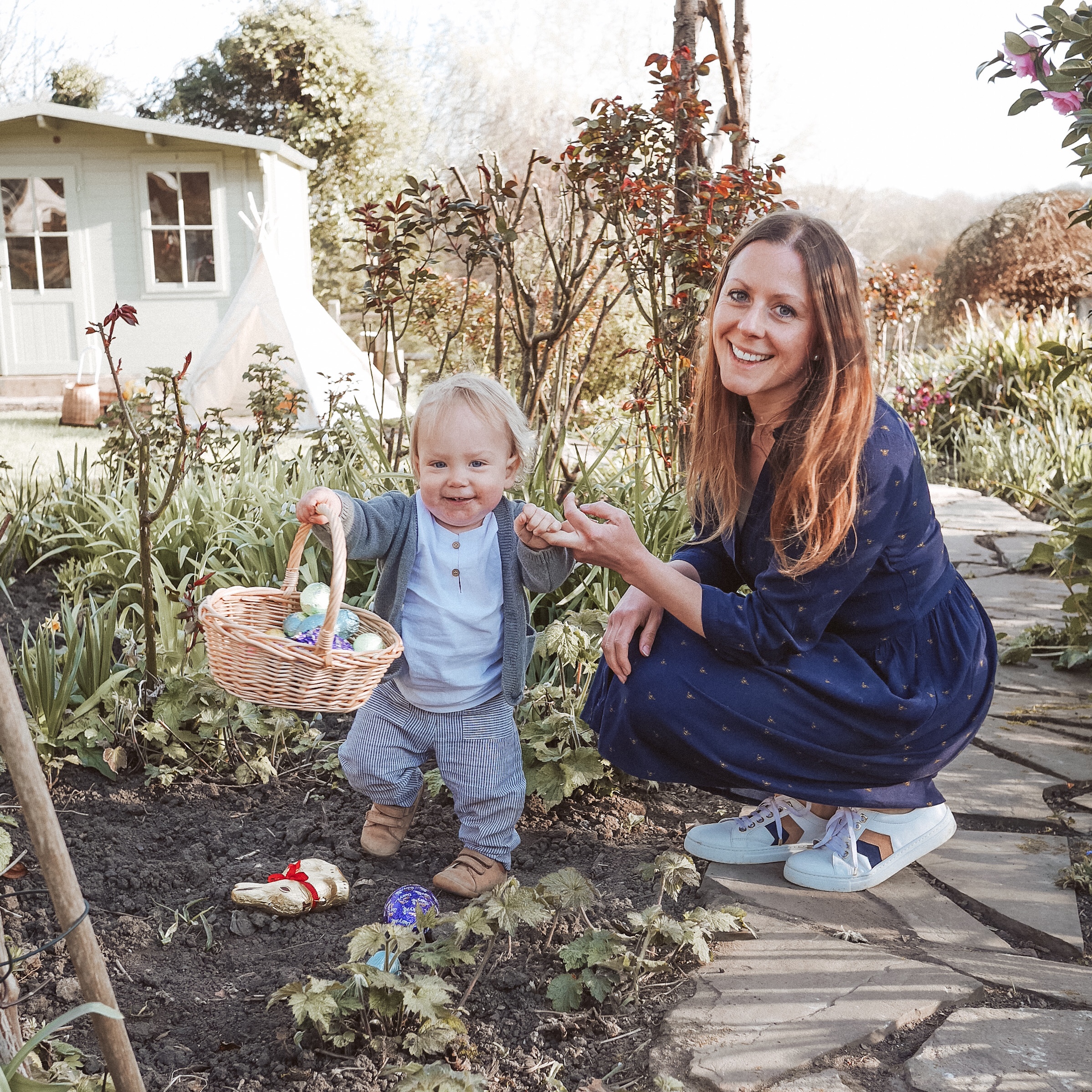 While Rupert was was taking an afternoon nap yesterday, I made my way out in to the garden to set up an eggcellent Easter egg hunt for when he woke up.

It turned out to be a huge success with Rupert proving to be a rather eggcellent Easter egg hunter.

Once I had placed all of his 24 Easter eggs (which unless he shares, he will still be eating his way through them until this time next year)! around the garden in all his favourite places to play, I sat with Shiva and Bunter in the sunshine and waited for him to wake up. We waited and we waited some more, all the while I sat thinking to myself that I hoped the eggs would not melt in the afternoon sun.

When Rupert finally decided to wake up and join us in the garden the fun began.

Initially we thought it was going to take hours to find all the eggs, as although Rupert was enjoying discovering and picking up the colourful Easter eggs, he wanted to sit in the flower beds and take them out of the basket only to then put them back in again. We let him do what he wanted after all it was his egg hunt.

Once he’d lost interest in his own little game, he was ready to get up and continue on the hunt for more eggs.

He set off down the garden with a look of pure determination on his face.

Being a quick learner it did not take Rupert long to work out what he had to do. He soon began looking out for and picking up the eggs before carefully placing them in his basket.

He did take a few breaks to rummage through his new treasures, and was extremely excited when he discovered that they were chocolate!

Being the generous little boy he is, immediately offered his mummy one of his eggs.

And then tucked in to one himself.

It was then time to do a quick check to make sure that daddy had not helped himself to any while his back was turned.

Satisfied all his eggs were still in the basket, he led me back up the garden path to ensure we had not missed any.

To his delight there were more to collect.

While sitting and inspecting his eggs once more, one fell out of its wrapper and after contemplating sharing it the urge to take a BIG bite out of it took over his generosity.

Feeling that he’d had quite enough chocolate at this point, he was not amused when after he had taken a bite the egg was removed from his clasped hands.

Thankfully his tantrums are short lived, and all was soon forgotten when the dogs came out to join us in the now chocolate free garden.

Aside from being Easter, yesterday was special day for us for another also as the 4th April is my darling Shiva’s Birthday! This year marked her 13th!

I am fully expecting Rupert will now be on the look out for eggs every time we are in the garden.

I hope you are having an eggcellent Easter yourselves and if you have little ones that they enjoyed their Easter egg hunt as much as Rupert did his.

(If you love Rupert’s outfit click here, its from Organic Little One, and you can get 20% off using code Rupert20)