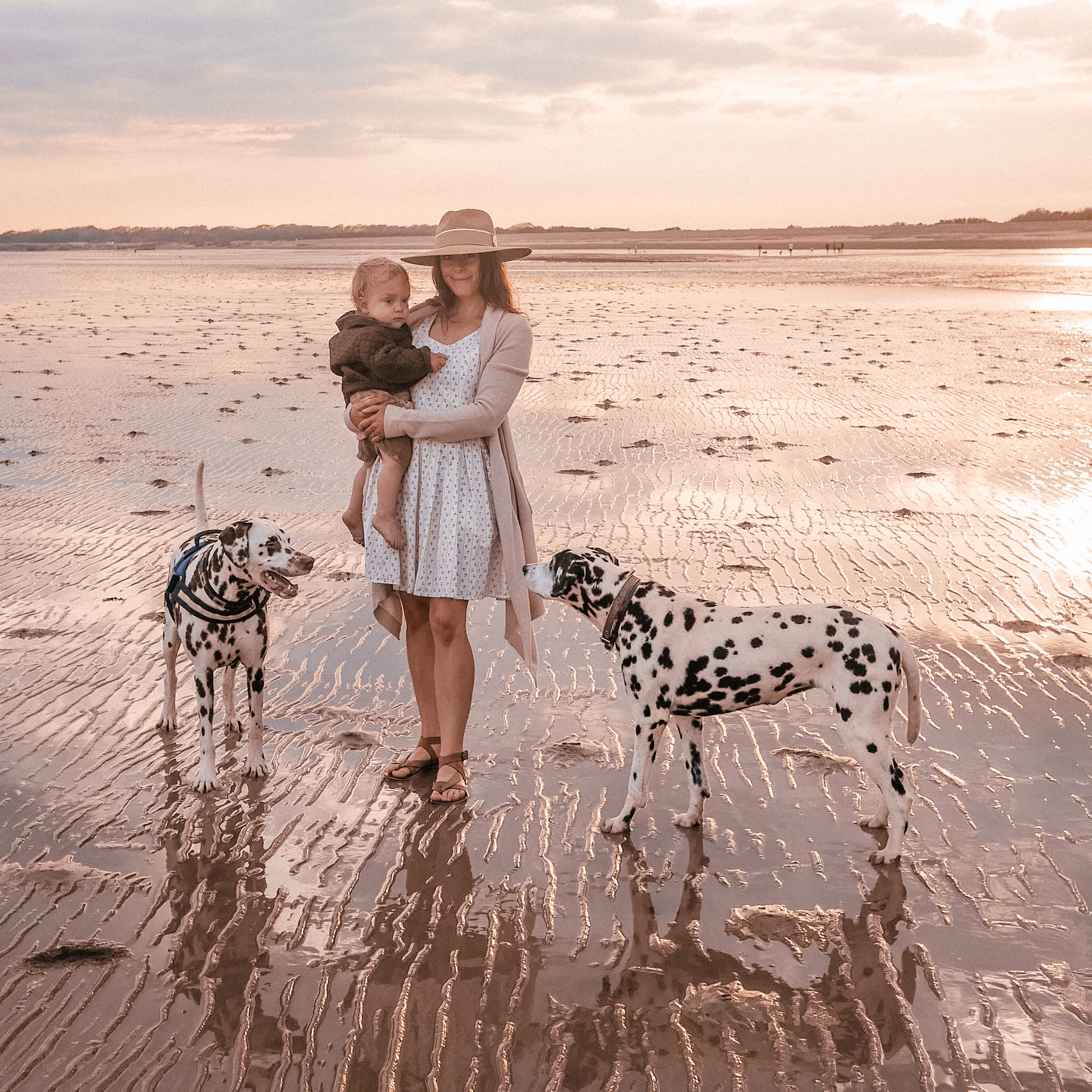 Last night along with our good friends and Rupert’s godparents Jill and Paul, as well as our pack of dogs we visited the seaside.

I had packed some gin for Jill and I and beers for the boys to go alongside our fish and chip supper. It was only when we picked up the supper that I realised I had forgotten a bottle opener for both drinks as well as glasses for the gin. We thought of a work around, yet I still managed to leave the drinks in the car, only realising when we had started the walk to the beach from the car park. It was not worth the trouble with five pulling dogs and a toddler to backtrack!

Surrounded by five ever hopeful panting dogs, we sat in the sand dunes and tucked in to our fish and chips.

Rupert, who decided he could not possibly wait for his supper until we reached our destination, had already eaten his food during the journey in the car. After sharing a few chips he was keen to get exploring his new surroundings and wandered off towards the sea with Chris and Paul in quick pursuit!

Jill and I ate our fish and chip supper in peace with only Shiva sticking by us while the rest of the dogs had given up and followed the boys down to the sea.

By the time us girls had made it down to the sea Rupert was beaming his best smile and was extremely animated after clearly having a great time.

Stepping in to the sea it was surprising warm, which was fortunate as Rupert was drenched by the time we caught up with the boys and the dogs.

The last time we took Rupert to the seaside he was not yet walking so this trip was a special one, as knowing how he has developed a love of water it was going to be exciting to see how he would take to the waves.

It’s safe to say that the sea was a real hit with the now walking Rupert and the dogs will now have a toddler in tow when they play in the sea.

The dogs always have such a wonderful time at the seaside and it gives Shiva a real boost of vitality which is lovely to see.

Bunter even got quite brave and ventured out further in to the sea than he ever has done in the past. I think the spaniels have been telling him of the joys of swimming.

On each of our beach walks, I always manage to get a photo of all the dogs together, however on this trip despite my best efforts and a pocket of Fish & Tricks I had to admit defeat, it was simply not happening.

After a really good blast along the beach and in the sea for the dogs and Rupert, we made our way back to the car where Rupert was dressed in his pyjamas and given his last feed for the day and we headed home high on the joys of life.

It really is the simplest of things that bring the most joy and lasting memories.