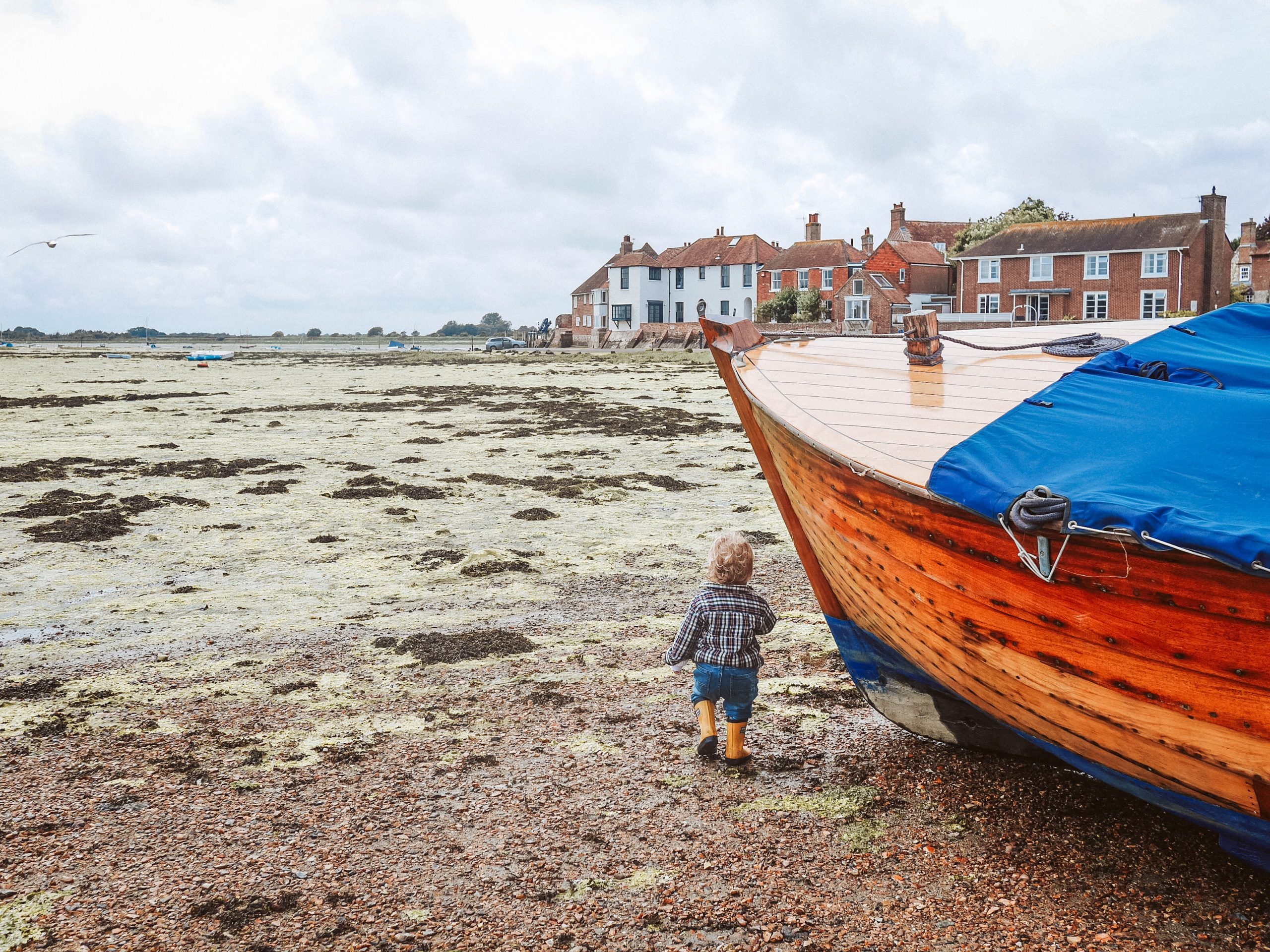 At the beginning of the week, we took a trip down to the sweet and idyllic village of Bosham for lunch and a bumble around for a couple of hours.

Sending Chris in to one of the local eateries, Shiva, Rupert and I sat outside and waited patiently for Chris to return with our lunch requests. A sausage roll for Rupert and a beetroot baguette for me. Oh and of course a little treat for Shiva too! While we waited we met a few locals and their four legged friends who came to say hello to Shiva, Shiva was however not interested in any social niceties as her eyes were firmly fixed on Chris and the food being prepared.

Wandering around to the little streets to the church, we took the bridge over the millstream and found a quite spot to rest and refuel in the quay meadow.

As we sat and ate our lunch, the sun was shining and there was a gentle breeze which bought with it a soothing chinking of metal on metal.

I say sat and ate, in reality we did not all get to sit and eat at the same time as Rupert had other ideas and sitting still was not on his agenda. He saw no point in sitting around eating when there was so much exploring to be done, so shoving as much of his sausage roll as possible in his mouth he went of to make a start on his exploration.

Leaving Chris and Rupert to go off and climb trees, Shiva and I sat quietly and had a cuddle enjoying the peace and quiet if only for a few moments.

Being a greedy Dal ruled by her stomach, once Shiva had worked out all my food was gone she soon left my side to go and seek out the remainder of sausage roll!

The cheekiest of Rupert smiles beamed back at Shiva and I.

Once Rupert was satisfied he’d done all the exploring to be done around the meadow we headed back down the narrow streets in search of the ice cream van we had spotted while waiting for our lunch.

Once more, always on the go Rupert was too busy to stop and eat, I had to practically chase him to get him to have any of his ice cream at all, while my own ice cream melted in my hands! In the end I gave up the chase and handed Rupert’s to Chris to eat as well as his own. One thing Rupert did not waste though was the chocolate flake.

The next ten minutes were spent chasing Rupert around a boat! He thought this was an immensely good game.

Back at the car, two ducks waddled by. We had been expecting to encounter the resident ducks and swans and had therefore arrived prepared with supplies for them.

All the salty sea breeze sent Rupert off to dream land as soon as we started driving away from the harbour and he did not wake until we were home.

As we drove away from the village, looking back at the quiet and still boats, it got me thinking about what’s to come in the coming weeks with lockdown lifting and all the anxiety this fills me with after 16 months of a very different and sometimes difficult way of life which we’ve become accustomed to.

Later in the evening, I came across a quote which I felt was quite apt for how I was feeling.

A ship in a harbor is safe, but that’s not what ships are built for ~ John Augustus Shedd.