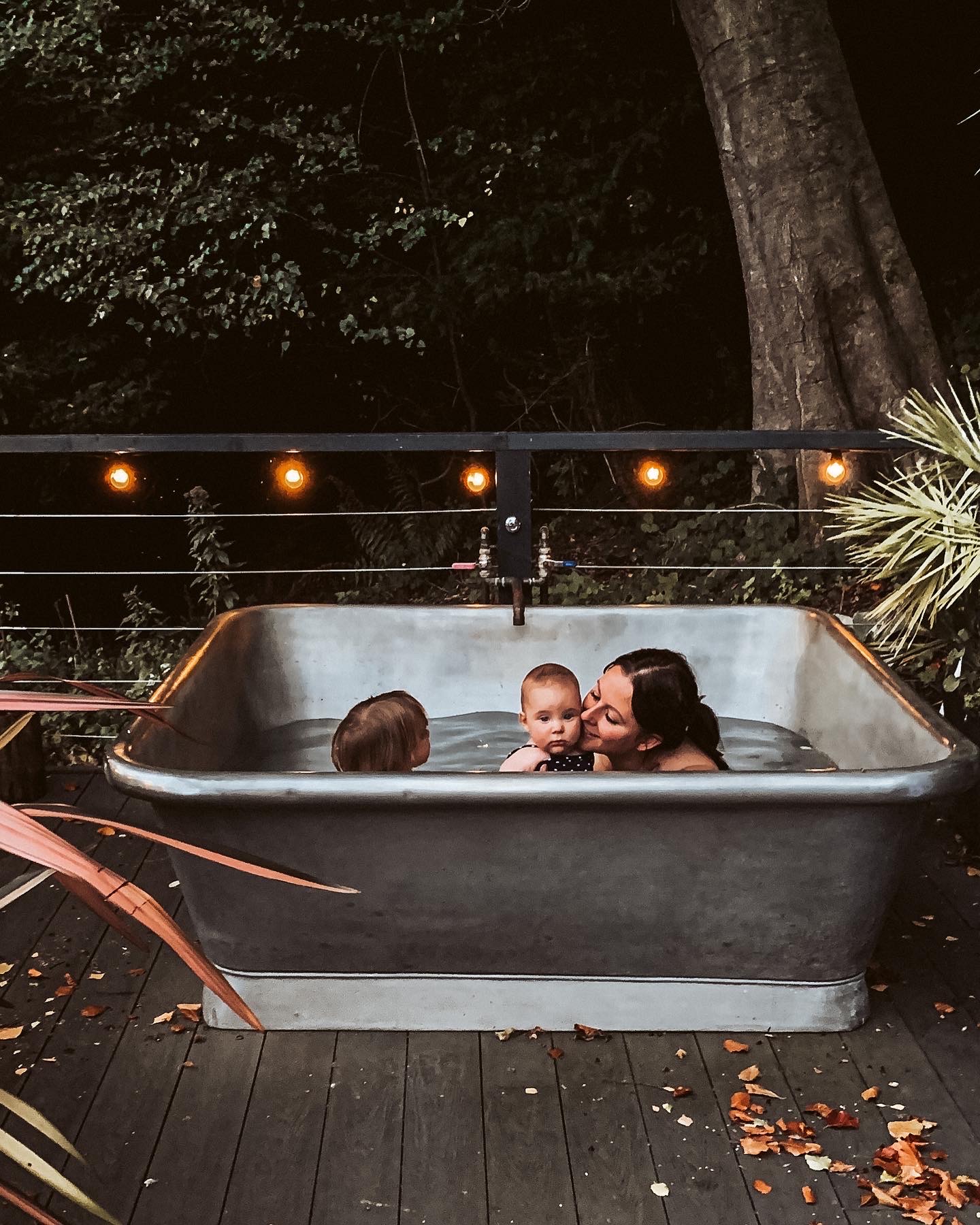 All our trips away in the UK generally turn out to be somewhat similar to a carry-on film. Our recent mini break at The Rapids Cottage, a sweet little hilltop hideaway situated on the cliffs of Symonds Yat in Herefordshire was no different. This trip will always be known to us as carry-on carrying, due to the amount of carrying Chris had to do, be it carrying Shiva up the 30 steep steps to the cottage (along with any other steps or obstacles we encountered on our trip. He was also required to carry Rupert for the majority of our time away as he seemed to have forgotten how to use his legs, unless he was chasing Bunter that is!

When it comes to booking holidays for us, this has always been my department, be it here in the UK or abroad, and due to this and the fact that Chris had not so much as looked up where we were staying, (it’s always a surprise for him), I take full responsibility for all the things that I had not considered as potential issues/hazards for our family on this trip. Perhaps I had overlooked these things at the time of booking not thinking they would be issues as back then our family looked very different. I was in the early stages of carrying Darcie, Shiva was fit and much more able and mobile, while Rupert was not as mobile nor as destructive as he is these days. Or perhaps I was just utterly swept away by how idyllic the cottage itself and its clifftop position sounded. “Deep within the ancient woodlands of the Symonds Yat Valley lies The Rapids Cottage, the perfect spot for those looking to switch off and embrace the serenity of mother nature. Relax in the bubbling outdoor bath, listening to the river rapids, the birdsong and the rustling of the trees”

I like to think that I am someone who is fairly easy going and will always find the funny side in situations in the moment, Chris is the complete opposite, (as I type this and ask him if this is a fair comment, he is saying to me he is safety conscious, and we were on the edge of a cliff)!

All the things I had overlooked as issues/hazards for us, were all there in black and white under “What to Expect” on their website had I taken the time to look. “Not suitable for those with mobility issues“(Shiva is now not very strong on her back legs yet looking at her a year ago I would never have envisaged any problems as it’s only been in the last couple of months that she has started to struggle with her mobility. “No washing machine” (we use reusable nappies), “those with mobile children under 3 to contact us as there are steep, open backed stairs in the cottage and the awnings to shut of the deck outside are more of a deterrent than safety feature“.

Aside from all the things I had overlooked on this trip, and we only discovered upon reaching our destination, I left home feeling very pleased with myself as the day before we left I had had the slow cooker going all day and night working hard to cook our dinners for the duration of our stay and had also made soups for our lunches to ensure we could walk, explore and then sit back and relax (easier for some of us to do than others), for the rest of the time making the most of the cottage and all it had to offer which was a lot!

Things went wrong for Chris before we had even made it off of our drive, as he and the roof box fell out as they always do. I was of very little help other than passing a few bits up to him to stow away as when I was not feeding Darcie, I was playing with Rupert who was busy digging up the drive with his construction vehicles. Unfortunately for Chris things did not improve.

Leading up to our time away Darcie had not been a very keen traveller, we did wonder just how many stops we would have to make before reaching the cottage to keep her settled. Thankfully we only had to stop twice and neither time was due to her becoming restless. Once for lunch and once to walk the dogs. The only blip we had was when we were 20 minutes away from the cottage and Rupert started getting frustrated and began crying which in turn set Darcie off too. Chris had not until this time experienced the full extent of how distracting it is having two little ones kicking off in the back.

We arrived late afternoon to the sunshining, the birds singing and the rapids flowing wildly below. I felt my shoulders drop as I began to sink into a more relaxed state taking in the sights and sounds all around us. Chris meanwhile had the 30 steep steps to climb back and forth with Shiva and then all the bags (I don’t believe that packing light is an option with two dogs, a baby and a toddler).

Everyone aside from Chris settled in the cottage quickly.

I poured myself a glass of wine taking a few minutes to myself to admire the view from the bedroom balcony.

Built in the 18th century the cottage has been renovated simply yet tastefully in Scandi style decor.

I always come away from our cottage stays full of enthusiasm about adding in bits to our own cottage that I have seen in the places we have stayed. I particularly liked the hanging lights and mini shelves by the side of one of the beds, just enough room for a cup of coffee.

Rupert was pretty excited to be in a new place with lots of different things to see and do, and as such was not keen to go to bed when bedtime came around, (saying that he never is)! Any “us time” was out the window.

I poured myself another glass of wine to get me through what I could see was going to be a long night!

While Darcie and the Dals slept on soundly Chris, and I were wide awake with a sleepless reckless Rupert. No need to light the fire we were all warm from Chasing Rupert around trying to stop him climbing the stairs to wake Darcie!

While Chris was on tender hooks for the entire stay, as I drifted off to sleep that first night in the room that Darcie and I had claimed as the girl’s room, (the one with the balcony) I was already planning my return with people who I knew would appreciate this unique cottage as much as I did.

Waking up the next morning it was drizzly but warm.

I took my first coffee overlooking the cliffs listening to the rapids running down below the cottage.

It was then boots on and off we went.

We had planned on having breakfast at the cottage however although we had packed for breakfast, we had no butter to accompany it. We stopped in at the sweet local shop which had everything we needed that had been left at home and picked up some pastries to fuel us for our days adventure. While I waited for Chris I was touched as one of the shop assistants came out with a blanket and placed it over an older lady’s lap as she sat outside at one of the tables reading the morning papers with her husband. Chris came back to the car with a coffee for me handing it to me saying he felt I needed it. I was not offended and took it gratefully with both hands.

During our time away the Dals took their first trip out on the water as we had to or so I though (I read the directions all wrong,) use the hand pulled ferry to cross to the other side as part of the walking route I had picked for us. Neither dog was amused by this inconvenience. Rupert on the other hand thought it most fun.

Shiva and Bunter don’t like water at the best of times, so it was probably quite amusing for any onlookers watching. It was not an easy crossing with Chris coaxing Rupert to use his legs, Shiva needing to be carried on, me with Darcie strapped to my chest and Bunter trying to avoid jumping into or off of the ferry without falling into the water as the boat swayed. Thankfully a lovely lady offered to help me off the other side by taking bunter. I was hesitant as he’s a STRONG dog, I told the kind lady that is he so much as pulled a little to let go of the lead as I did not want her getting dragged off the boat in Bunters eagerness to disembark the boat. Thankfully Bunter was a good boy and just happy to be back on dry land!

After our walk we were all keen to get to the pub for lunch. This had to be the most gorgeously located riverside pub (dog friendly and only 5 minutes from the cottage), I have ever been to. The food was delicious, and the pub was cosy and friendly.

It was just the stop we all needed.

Darcie contented and easy as ever after having her feed drifted off to sleep laying across the chair next to me. Unfortunately, she was rudely awakened by her brother crawling under the table and popping up to roar in her face unexpectedly ten minutes after she had drifted off.

There were boats a plenty both out on the water and moored up on the riverbanks.

Back at the cottage the little ones took a nap together after the morning/afternoon’s adventure.

We attempted to make use of the wonderful outdoor cinema hidden among the trees, with two sleepy babies on us, but Rupert woke up and was initially excited for a big screen film before losing interest and wanting to play with his diggers in the mud instead, for which we took it in turns to join in his game, until Darcie also woke up and that was the end of that.

It was starting to drizzle but this did not hamper our plans to jump in the large tin bath out on the decking under the trees. Rupert was the first to hop in!

The Rapids cottage seemed in such a perfect position for exploring all that the local area has to offer and had Shiva been more able I know we would have all loved to have explored more of it, as there were some stunning walks to be had. The cottage would have been a marvellous place to escape to had I left the rest of my family at home! All joking aside I loved this little hilltop hideaway and would go back but I would most definitely not take Chris with me.